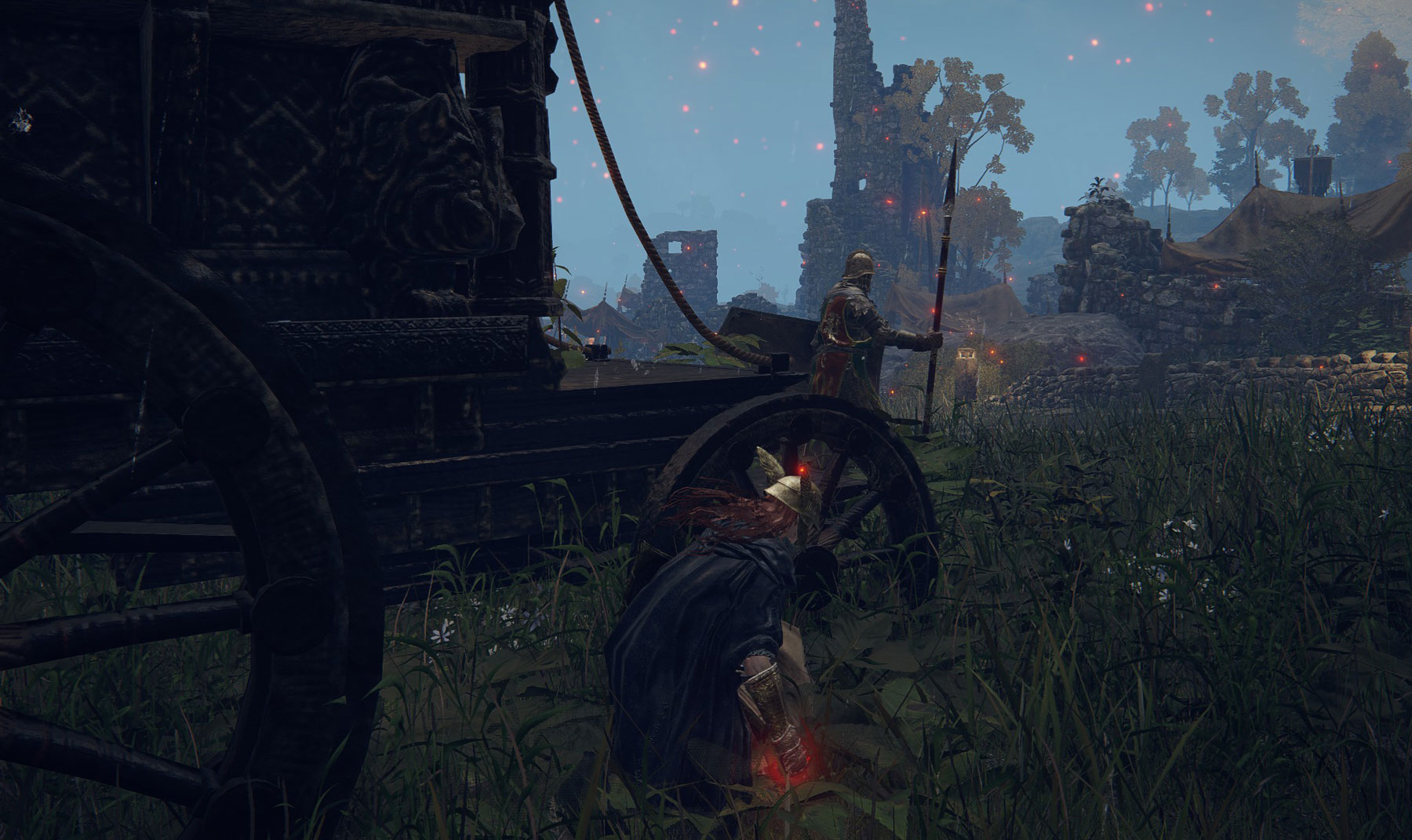 Elden Ring’s stealth system isn’t complicated at its core. You have a basic crouch that impacts visibility and noise emitted by your character, as well as a “hiding in the tall grass” system. There is more – which we’ll explore in future guides – but we’re just here to talk about the basics in this guide.

Let’s break it down, though, to remove any potential sources of confusion.

Noise is the most important part of stealth in Elden Ring, and therefore the first thing we’ll cover.

The primary method for reducing noise levels is to crouch. Crouching practically eliminates noise from movement, and allows you to creep up behind all standard foes, getting literally right up on them.

Armor weight has zero impact on noise detection; You can be at a light armor load and still get detected at the same point as you would wearing a heavy armor load.

Noise-elimination equipment such as soft cotton, the Black Knife armor set or Crepus’s Vial also work, but that will be covered more in-depth in a later guide.

Creating noise can also be useful in luring enemies to you. Simply striking a wall nearby will cause enemies to investigate the sound exactly where it occurred, making carrying a bow or crossbow in Elden Ring much more useful.

Finally, casting buffs and other non-combat spells doesn’t actually alert foes, whether they allow you to cast them while retaining a crouched stance or not.

The second most important aspect to stealth in Elden Ring is visibility.

First: Most standard enemies have a cone of vision radius of about 60 degrees in front of them. Also, some enemies may have a “looking around” idle animation, but despite turning their head in your direction, that doesn’t impact their actual cone of vision. This is purely a cosmetic animation.

While not as dramatic as sound detection, crouching does impact your overall visibility. This allows you to get closer to an enemy than you would standing up.

Another impact is lighting, but only in reference to actual ambient light in dungeons or outdoors: Night-time gives you a little more room to maneuver compared to daylight.

Finally, Elden Ring has a “tall grass” mechanic that allows you to hide in bushes. As long as you’re crouched you can stealthily approach many foes within their cone of vision, but as soon as you stand up you will be detected.

Stealth works well vs. most standard enemies, allowing you to establish surprise in an encounter on your terms in many situations.

Some enemies, however, have guaranteed detection triggers: This includes ballistas, trebuchets and other fixed emplacements, boss fights and more. No matter what you do, as long as you’re in the “trigger” area, you will be spotted and attacked.

Finally, you can re-engage stealth after detection. Many enemies have a “chase radius” that they’ll pursue you within. Initial detection for most foes will start with turning toward you, but not pursuing. If you get closer or take hostile actions towards them, they’ll pursue you. Before pursuit you can escape and they’ll return to their default state, completely unaware of you again.

If they are in pursuit you’ll need to get outside their chase radius; as long as you don’t re-engage them you’ll be able to return to 100% stealth again after they get close enough to their default location. There are other ways to lose enemies and re-engage stealth, however, that we’ll discuss in future stealth guides.

Don’t forget to check my guide on using stealth vs. bosses in Elden Ring, too; Part 2 of my Elden Ring stealth guides will be coming soon, and will cover stealth equipment, armor, and other tools.