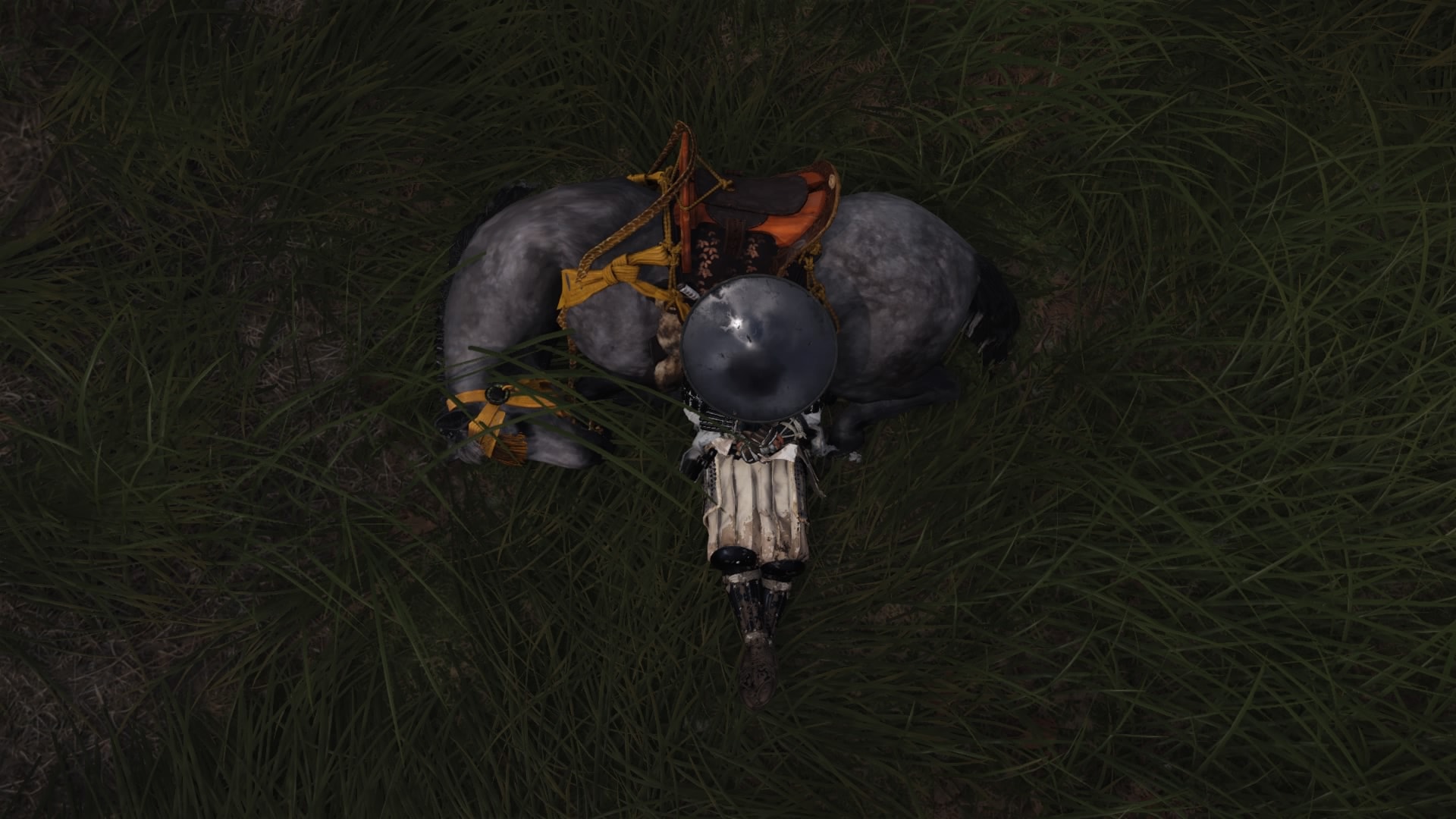 Ghost of Tsushima, the latest from Sucker Punch, is a game that many (including myself) have been waiting ages for. While many would just claim it to be a clone of modern Assassin’s Creed games, or even Souls-Lite, the gameplay is in some ways more reminiscent of Horizon Zero Dawn with a story that is rich, dark, and powerful while giving you the option to play the stealthy shinobi you’ve always wanted to be.

While most reviews will focus on the overall game, here at GGN, we care about stealth; that’s where our review will delve into, so you can decide for yourself if you’ll find the dark shadows (or tall grass, in this case) you’re looking for.

Fair warning: Minor spoilers on equipment are below, but are nothing to worry about in my opinion.

The Art of Staying Hidden in Ghost of Tsushima

Tall grass is much like in Horizon Zero Dawn and Sekiro: Shadows Die Twice; simply put, if you’re crouched in the tall grass, you’re pretty much invisible. The tall grass is available all over the (well-designed and expansive) map, leaving you plenty of hiding places when creeping up on the Mongols (the resident bad-guy in the storyline) and their encampments. It isn’t anything unique to modern stealth games, but it works.

Verticality operates much like Assassin’s Creed, in that chilling out on rooftops and ledges makes you virtually invisible to those below you. With the rolling hills and towers, however, you do have to watch for other enemies who might be above or on a relatively level plane with you, so just sticking to the rooftops isn’t always going to be your best bet.

Finally, line of sight works just like any other stealth game; Creep behind someone, or hide behind a ledge, tree, or fence and you’ll be able to sneak past your foe with ease.

Ghost of Tsushima’s stealth utilizes all 3 without a lot of extra nuance, but it works well, combining with a traditional visibility meter that lets you know when you’re in the sights of someone who is about to discover you. While a bit hand-wavy in how you know that someone behind you is close to spotting you, it’s a classic mechanic that has served stealth games well over the years, making stealth gameplay accessible to more casual gamers.

Taking a stab at assassination

Assassinating foes in Ghost of Tsushima is a core mechanic if you plan on playing stealthily; You’ve got your short blade and plenty of shadows to stab from, and the game doesn’t take a lot of liberties in this regard. Much like other stealth-focused games, for regular enemies it is one hit, one kill when using the assassination mechanic. For “bosses” (Mongol Leaders), you instead do a critical strike (until you’ve reached a certain point in the game).

It’s unfortunate that not much has been done to innovate in this field; Essentially, you can upgrade your short-sword a couple times to max out the damage you do when performing a critical strike (as well as shorten the duration of the animation, which is key to staying hidden), but other than that.. Nothing to write home about. Still, it works, so there doesn’t necessarily NEED to be much improvement in this regard.

One minor additional feature that we’ve also seen in Assassin’s Creed is a chain assassination mechanic; fully upgraded, you can stab up to 3 people in close proximity.

The tools of the Shinobi

Where Ghost of Tsushima shines is the Ghost Tools available to you; thrown weapons, explosives, smoke bombs, lures and more.. With some interesting upgrade mechanics. Upgrade your wind chime distraction to allow you to also throw firecrackers for luring multiple enemies. Upgrade your smoke bombs to give you greater “hidden” duration, or even heal you. There are a number of unique combinations with all of these, and each is worth exploring depending on your playstyle.

Beyond that, you’ve also got bows, and later on, blow darts. Archery is a standard fare, starting with a short bow and eventually allowing you to also use a long bow. You can utilize regular arrows at the start, and later add explosive arrows and fire arrows. Given the limited mechanics for replenishing your arrows (no crafting here – you’ve got to go buy them or pick them up), without a well-crafted build (utilizing the right charms).

What becomes interesting is when you finally pick up blow darts; You start with a instant-kill poison dart, and later can add a hallucination dart that makes your enemies go crazy and attack everybody. Hilarity ensues at this point, and gives you yet another means of getting rid of the chaff when taking out the mongols. Target the biggest beefcake you can and watch your targets dwindle under his assault.

Finally, at the end of the first ⅓ of the game, you get something absolutely critical in expanding your reach: A grappling hook. While relatively limited in use, when you’ve got the option to use it, you’ll want to. It makes getting around the stealthy locations much easier and is worth making use of.

Shining a light on the failures of Ghost of Tsushima

Ghost of Tsushima is a great game. It really is. It’s fun, tells a story spectacularly, and has some unique as well as tried-and-true mechanics that make it a worthwhile investment for fans of stealth gameplay.

It isn’t perfect, however.

There are bugs. The few that come up do get squashed, but they exist. Given this is an open world game, that’s not too surprising.

The game also doesn’t allow you to play strictly one way or the other; You can’t play as just an archer, just an assassin, or just a brutish samurai. If you want to play just stealth or archery, you will still have to contend with forced duels (which don’t allow you to use anything but your sword – no other tools available). If you want to rush in and beat the living tar out of everybody in each situation, you’ve still got plenty of missions where you’ve got to sneak in and out undetected. Thankfully, these situations all feel “right” in the story, and if you’re not good at one or the other, feel free to adjust the difficulty to reduce your frustration at each.

Finally, once you beat the game.. Well, there isn’t much to do yet. Finish up all the side-stories, side-quests, and hunt down every collectible, sure, but you’re lacking in what makes Ghost of Tsushima so great. With that in mind, I definitely suggest you take the game slower and enjoy it. Do the side quests in between main missions, and don’t skip the cutscenes.

Ultimately, though, this game is definitely worth it. For those of us passionate about stealth gameplay, we’re pretty limited in our modern AAA choices, and Ghost of Tsushima is enough to scratch the itch for many of us.

Get Ghost of Tsushima below and help support GGN!