An interview with the creator of Specular Stranded 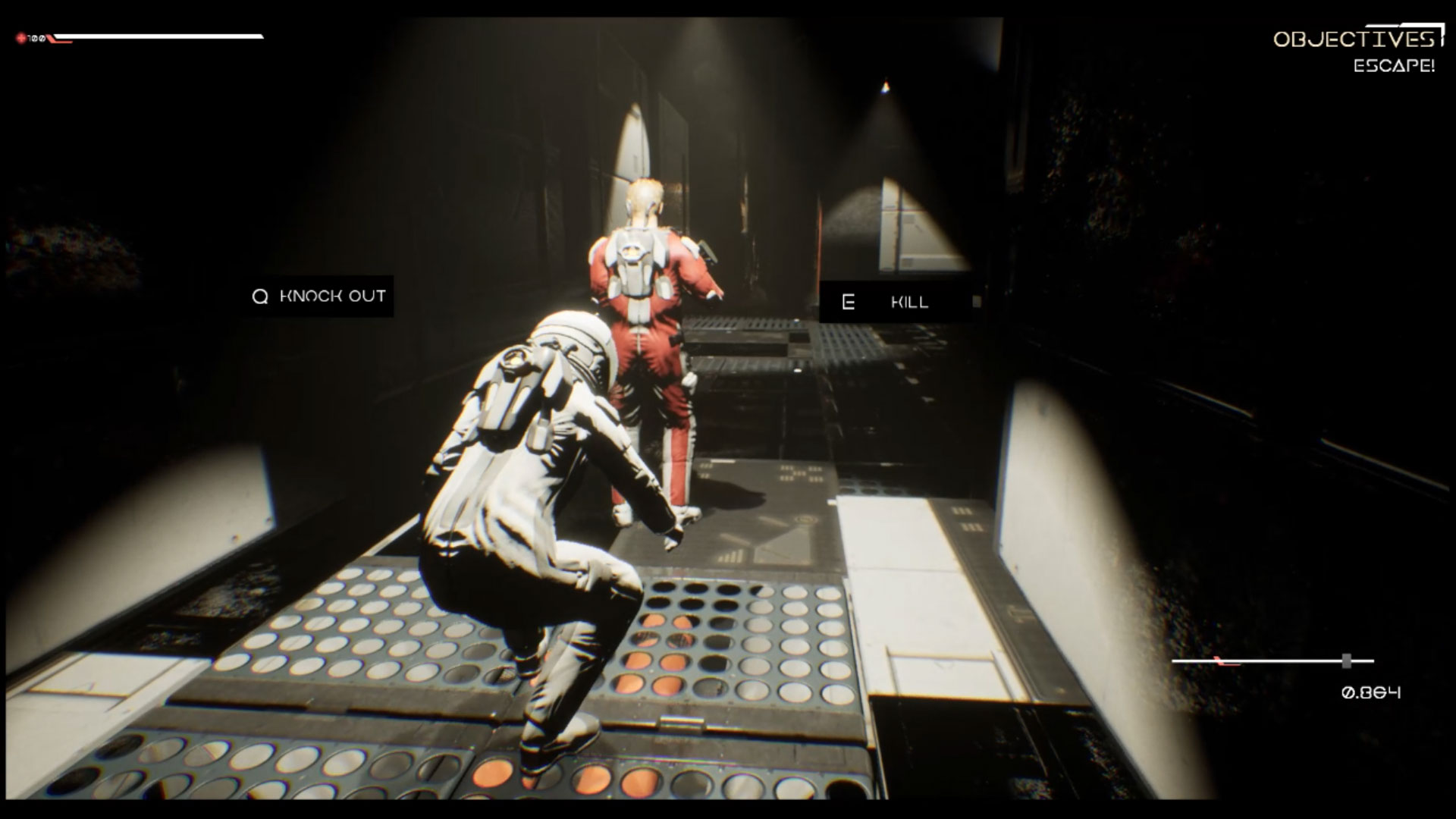 Just last week I was mindlessly scrolling through Reddit, when my brain registered something new on the Splinter Cell subreddit: A video of someone in a space suit creeping through darkness.

After I watched the video, I was immediately intrigued. I reached out to Patrick and asked if he’d subject himself to an interview so we can talk further about his new game, Specular Stranded. He’s such a great sport that he said yes, and here’s the results of that interview.

WFL: What prompted you to make Specular Stranded?

PF: I had been travelling across Asia for the past 7 months from the Summer of 2019 until March of 2020. I had intended to go to South America after Asia but unfortunately the trip was cut short due to the Coronavirus pandemic.

Suddenly, I had found myself back at home, with no full-time job (I had quit to go travelling) and a lot of free time. I had always wanted to make a game and release it on Steam. It was sort of a bucket list item to me, like travelling the world. I realised that I would probably never have this much free time again in my life, so I decided to make a game.

WFL: What made you come up with the title?

PF: I struggled with a title for a while. One day, while writing an outline for the game’s story, I decided to name the ship that the player is stranded on ‘The Specular’. Then it just became obvious: ‘Specular Stranded’. My little wink at Black Hawk Down.

In my opinion, there are simply not enough hardcore stealth games being released and those that call themselves ‘stealth games’ tend to rely heavily on action to appeal to a wider audience.

WFL: What are your primary sources of inspiration for the game?

PF: Some of my favourite games of all time are the original three Splinter Cell games, especially Chaos Theory. In my opinion, there are simply not enough hardcore stealth games being released and those that call themselves ‘stealth games’ tend to rely heavily on action to appeal to a wider audience. This alienated me from the genre, and I suspect for many others too [WFL: Preaching to the choir with this audience]. Gone were the tactics of hiding in shadows, being patient, learning patrol routes. It was now all about just shooting whoever you came across without much reason to be silent.

I wanted to change this and make a game that went back to the roots of stealth games. So, I replayed the original Splinter Cell games and noted down the features that I felt embodied stealth. I had also recently played Dead Space and loved the claustrophobic atmosphere of being stuck on this ship, in space with your enemy. I decided to combine the playstyle of Splinter Cell with a Sci-Fi vibe and that was the origin of Specular Stranded.

WFL: If I understand correctly, you’re using the Unreal Engine for development. Have there been any limitations or hurdles you’ve found difficult to overcome in developing the game?

PF: In my university days, I had used Unity quite a bit and even developed my final year project in Unity, so I was well accustomed to that engine. After deciding to make Specular Stranded, I wanted to branch into Unreal Engine; many of my favourite games had been made in Unreal and I had heard great things from people who were using it.

The biggest hurdle in using Unreal was getting to grips with its visual scripting or “blueprints” as they call it. I have a background in Software Engineering, so was used to writing code in languages like Java. Unreal’s blueprint is like a drag and drop system. Instead of writing an If statement using code for example, you would drag in a capsule called a “Branch” and then drag the various conditions for the branch and connect. This took a bit of getting used to but it helps that Unreal has quite a lot of documentation to help.

WFL: What are the main mechanics for the game (such as light-based stealth, weapons, etc)? What sets your game apart from the current world of stealth games?

PF: The main mechanics of the game are a light-based stealth system. Essentially, the game will detect how much light is hitting the player’s body and a helpful UI slider will show the player how hidden or visible they are to the enemy. This is core to the game; the player should make use of shadows and dark areas to sneak around and either avoid their enemies or take them out from the shadows.

The player can also shoot out lights to create more dark areas to sneak around in.

There is a cool little gadget the player has which projects a small holographic window in front of the player and allows for night vision as well as seeing enemies who are close by through walls.

There is a takedown system that allows the player the choice of either knocking out or killing their enemy, which will affect their score at the end of each level. There are multiple unique, cool animations for killing and knocking out. I may be biased, but it’s quite satisfying.

Players can also hide bodies to stop other enemies becoming alerted to your presence. Whistling can also be used to distract enemies away from their patrol path.

The player will also encounter an assortment of weapons, though the player must choose wisely when to use them. Shots can alert enemies to your position and ammo is rare. Headshots also matter; mess up a shot and you could land yourself in a whole heap of trouble.

WFL: “Whistling can also be used to distract enemies away from their patrol path.” How does whistling work given you’re wearing a helmet? Is it a literal whistle, are you utilizing an external speaker, or something else?

PF: I hadn’t really thought too much in depth about this one; let’s pretend there is a really good speaker inside the helmet.

WFL: Could you expand a bit on the story/setting?

PF: Specular Stranded takes place in the year 2138. The Specular Ship was sent from Earth 2 years ago in a desperate attempt to find a solution to Earth’s ever-deteriorating climate crisis. Our protagonist wakes up on board the Specular ship and it seems all other crew members are missing or dead. An enemy has boarded the ship. It is the players mission to find out who these invaders are, what have they done with the crew and what they want with the Specular.

WFL: Are you exploring any zero-gravity mechanics within the game? It can be a tough thing to do well; Even Star Citizen, with it’s insane amount of financial backing and a team of developers is still struggling somewhat with zero-G movement.

PF: There are some small sections of the game that feature zero gravity gameplay. As you say, it can be very difficult to get the physics of zero gravity correct. My game wont have simulation-like zero-G. To be honest, there has to be a balance between realism and fun gameplay, so the player will have much more control in zero G than someone really would have and I made that compromise so that gameplay stays fun and fluid. I am sure some purists will be disappointed by that, but I also don’t want gameplay to come to a crawl because players are bumping off walls and unable to properly control their movement.

WFL: Approximately how much playtime do you expect to get upon release?

PF: It is a bit hard to say how much playtime there will be at this point in development. I would estimate at least 5 to 6 hours for one playthrough, though the game is designed for multiple playthroughs for a few reasons that I can’t quite get into right now..

WFL: Any plans of doing an early access release, or a public/private beta?

PF: Yes, I plan to do a private beta for a small portion of the game to my Patreon followers.

WFL: How long has the game been in development? Based on the Steam listing you’re planning for a Summer 2021 release; do you feel confident in that timeframe, or is it more of a loose estimate for now until you get closer to release?

PF: The game has been in development since March 2020, so around 8 months now. I do feel confident that I will be able to release the game by Summer next year. I haven’t given a fixed date yet; we shall see how the polishing stages of development go.

WFL: Following that, are there any mechanics you’d like to pursue, but don’t have the time/resources to do so?

PF: I would love to have a ship flying segment in the game. This one may still make it in, we shall see..

WFL: After you finish it, what’s next for you?

PF: Who knows?! I have other game ideas kicking around that I would love to get to, I would also love to continue travelling after the pandemic. Right now, my sights are just set on getting Specular Stranded finished.

PF: Thank you for the interview, the early response to Specular Stranded has been great! The only other thing I have to say is please Wishlist my game!

That’s the interview, folks. Patrick is one of many independent developers out there working hard to do great things. If you’d like to learn more about Specular Stranded or support it, go support Specular Stranded on Patreon, and don’t forget to wishlist it on Steam!

Since Ghost Gamer News is a one-man endeavor, I have a special place in my heart for small independent developers. If you’ve got a game in the works in the stealth/sniper/tactical genre, please reach out to me and we’ll see if we can’t get you a little more visibility!