Is the MSR the best sniper rifle in Ghost Recon Breakpoint? Let’s break it down. 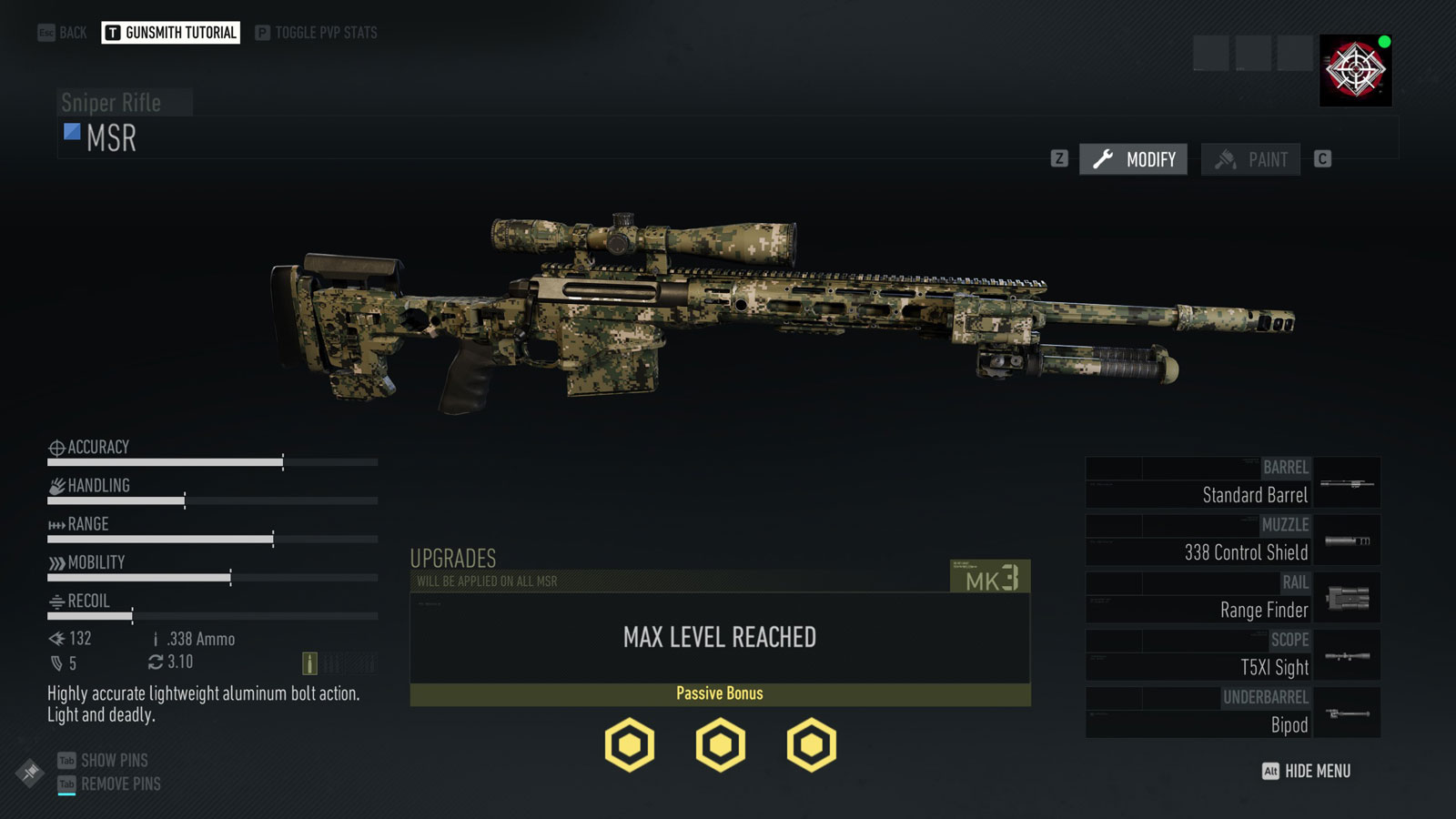 UPDATE: It looks like the MSR suffers from the same wild fly-off round bug that the Scorpio & Scorpio Scout suffer from. In order to fix rounds going way off the mark, you’ll need to switch to another weapon, fire a round, and switch back.

First, don’t forget to subscribe to GGN’s YouTube channel for more updates, and to get notified when I go live with a stream! I stream every other Saturday at 9 PM CST, covering not just Breakpoint, but countless other stealth and sniper-themed games!

TU 4.0.0 added the MSR as a purchasable blueprint from Maria’s shop, making it easy to acquire once you meet the 45,000 skell credit price. Hot tip: If you’re in need of a few thousand skell credits and haven’t cleared out all the Aamon Drone Camps, just deactivate drones in the World Settings and you can easily grab 1500 to 2000 skell credits per camp without having to do anything but trot across the map.

The MSR has a moderate range stat, but we’ll talk more about that later. Here you can see how it compares to the other sniper rifles in Breakpoint.

Damage is in the middle-of-the-road, too, taking 10 shots to destroy a Landscape Mk. II while suppressed with Rolling Thunder active. This puts it in-line with the Scorpio (and Scorpio Scout), only being beat out by the Zastava (5 shots, although it can’t be suppressed), HTI and M82 (6 shots) and TAC-50 (8 shots).

Detection range for the MSR is 202m when unsuppressed, and 16m when suppressed.

Where this rifle really stands out, though, is it’s usability with optics. The best scope for the MSR is the T5XI; Without Ballistic Advantage, and with the Range Finder attachment, you can utilize the T5XI reticle as a bullet drop compensator. The center is 200m, the next line is 300m, the line after that 400m, then 500m, and just above the bottom is 600m, as you can see in the illustration.

This means the previous champion, the Recon A1 with the TARS101, has officially been unseated if you want a more immersive experience when sniping. The T5XI is a 6x optic, while the TARS101 is just 5x. On top of that, the MSR does significantly more damage; The Recon A1 takes 15 shots to the MSR’s 10 to destroy the same vehicle. That means pretty much anybody, including Wolves, will go down with 1 shot, which is much more realistic for a 338 round.

While the Scorpio & Scorpio Scout both do the same, and can use the VC16 optic with Ballistic Advantage to line up with the reticle, both of those rifles suffer from severe accuracy issues where shots will fly incredibly wide for no explicable reason.

The only real downsides to the MSR vs. other rifles is the rate of fire and limited magazine size; the MSR takes a fair amount of time to cycle the bolt in Breakpoint, and you’re relegated to just a 5 round magazine. This means doing whatever you can do to ensure a fast reload; If you’re playing Pathfinder, load up on rations. Sharpshooter classes already have a nice boost to reload speed.

This means that utilizing it at closer ranges is more of a risk than the Recon A1: You won’t be able to keep a swarm of enemies at bay if you’re reloading every 5 rounds. However, that’s not why you should be carrying the MSR: The MSR is going to be a powerhouse at long range for those who like to keep their distance. Keep someone close by to ensure you’re covered should someone creep up to your shooting location. Thankfully, with the new Teammate experience update, you’ll have plenty of options to keep your backside covered while shooting.

How do you feel about the MSR? What rifle has it replaced for you? Let me know in the comments!