Available now in Early Access, how does Gray Zone stack up against games like the Wasteland series? 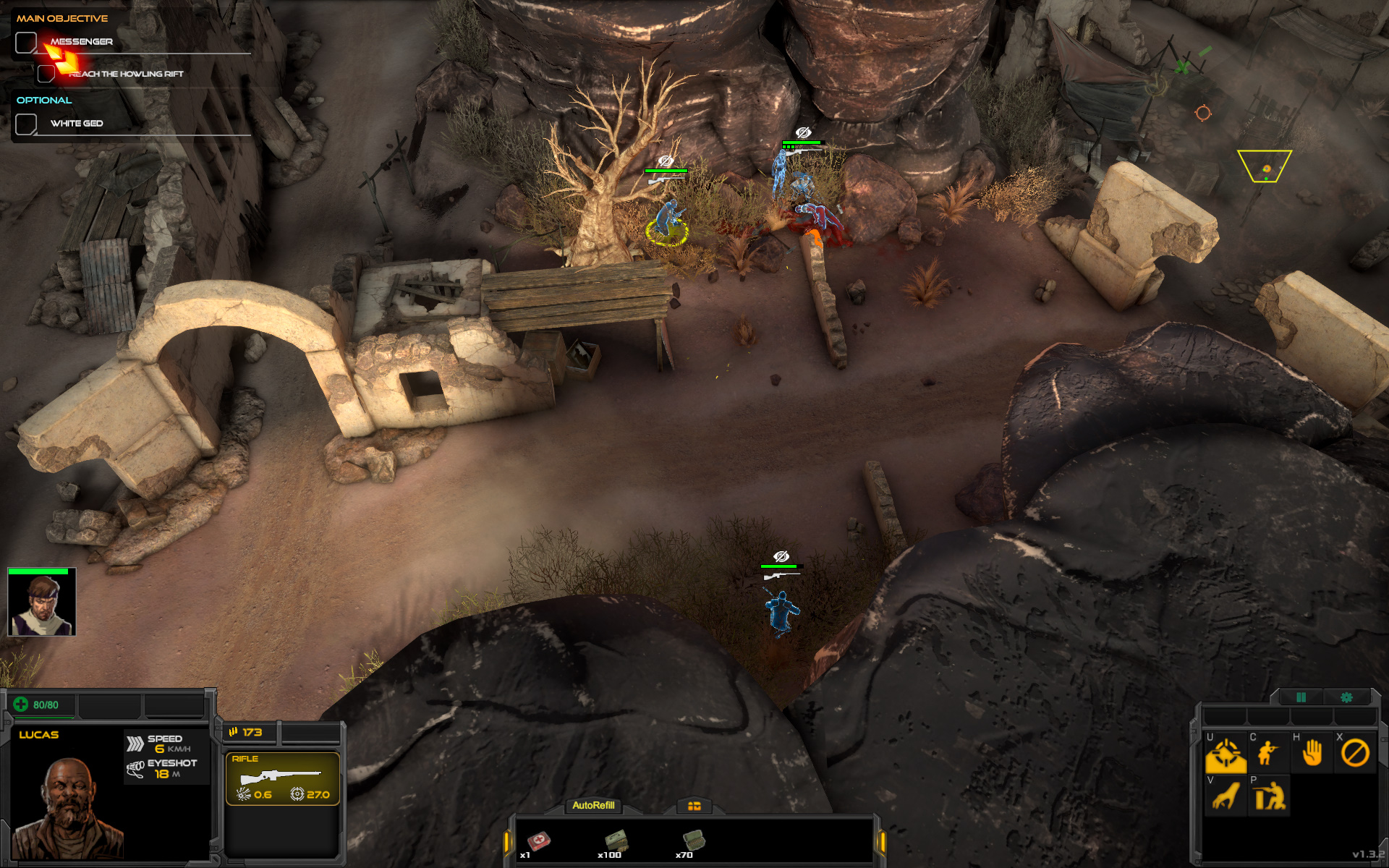 Disclaimer: This reviews the early access version of Gray Zone. A later review of the final release will come once it is out of early access.

With Wasteland 3 now out, many gamers who are fans of tactical gameplay are having a blast and investing hours upon hours in strategy, planning their shots and listening to brilliant quips in the dialog.

When I got a free copy of Gray Zone to review, I was anxious to give it a look and see how a smaller team can compete with such established fare.

The plot of Gray Zone

Gray Zone has your standard post-apocalyptic affair, and honestly, it just didn’t capture me. There was the standard “get out of here, take this special object and protect it at all costs” plot line, and then you’re teleported (a la something akin to Stargate) to a new area with mutants and crotchety assholes.

Really, the plot is thin and not exactly award winning. In fact, the dialog is.. well.. Cringeworthy at best.

The storytelling itself is particularly weak; it feels like an attempt at B-movie style dialog so well embraced in games like Fallout and Wasteland, but comes across as something a somewhat gifted but socially isolated high school kid might write (and given that I used to write stuff like this, yeah, I feel qualified to make that assessment).

The special object in this case is an amulet that has some form of AI attached to it that can interact with the world, but isn’t actually visible to anyone but you. It’s a little odd, and her dialog (yes, it is a she) is just as stilted as the rest.

Still, one can look past iffy writing if the game is good, so let’s push on, shall we?

The core gameplay of Gray Zone

As of writing this there is only one scenario and skirmish mode available. Still, that’s enough to get a basic feel, right?

Gray Zone is primarily designed around real-time tactical gameplay, but also strongly encourages stealth. It does have a “Tactical mode”, however. How does the tactical mode work?

Basically, tactical mode is just a way to pause and issue orders, but not much else. You’re not going to get a turn-based experience here. Overall, it’s basic, but it works.. and, in some ways, is absolutely critical.

One thing you may notice is there are a lot of shadows in the above screenshot, and some may not make much sense visually, until you realize.. Some shadows are just the “fog of war” that tells you what you can see, and some are just regular ole’ shadows.

That gets pretty confusing pretty quickly; it’s hard to determine whether you need to be concerned with what’s around the corner if you don’t know if you’re actually seeing around the corner or not. Thankfully, there is an indicator system for stuff you can presumably “hear” or detect in some other fashion.

At first I was confused by this (chalk it up to early access without any documentation), but then realized.. That’s actually pretty clever. You can get a sense that there is something up there, and even get a vague idea of where they are going based on movement of the indicator, but they aren’t exact. That’s a good thing, though, and adds an extra bit of immersion to the game.

This leads us into the next portion of gameplay.. the stealth.

When I was reading up on Gray Zone, I was excited to hear that stealth was suppose to be an important mechanic.

Unfortunately, thus far, all that is implemented is a basic noise level and tall grass/cover mechanic (along side a “crouch” toggle).

This is early access, of course, so not everything has been implemented (hopefully), but I wish there was more to play with in regards to stealth.

There are also visibility indicators, as well as alerts for when you are potentially being noticed; if you make noise, too, you can be discovered (not so much talking, as you and your comrades may frequently yell in response to their orders, but shooting definitely draws attention).

Stealth attacks do not seem to be implemented at this point; you’re not going to be creeping up on your foes and subduing them.

Being discovered is a rough prospect depending on the amount of enemies nearby; They’ll zero in on you quickly and take you out without a second thought. Sometimes you can get lucky if you were only noticed briefly, but they’ll still investigate your location.

Let’s move on to combat.

You might think combat would have some detail given that this is a tactical game, but you’d be wrong to think that when it comes to Gray Zone, honestly.

You can also take cover, but your enemies will rush you to the point to where it’s of limited use except for preparing to initiate combat. In fact, if you’re not ready for combat, you’ll see this screen a lot..

Combat overall is just a huge mixed bag. Enemies will take cover out of your line of sight, which is fantastic. Other times, even if they have firearms, they’ll run right up to your face and completely destroy you.

As an aside, I’m severely disappointed that you don’t get any sort of numbers with your tactical mode; no chance to hit, no indication of effective range of your weapons, no nothing. You can take shots from far-away, but that doesn’t mean you’ll hit, and you’ve got no clue what your chance of success will be. Still, once you start shooting your enemies will thankfully move closer to ensure you have a better chance of hitting.

One relatively positive aspect of Gray Zone, at least, is the graphics; they aren’t bad for an early access game.

Once you get back the comic-book style art intro and get thrust into the game, you see something that feels familiar. Detailed landscapes are definitely nice here, and thanks to the ability to rotate and zoom, you get to see them in all their glory.

The character designs, however, are pretty minimal, but that’s not exactly a big deal for an early access game; typically these will get polished further on in the game. I’ll reserve full judgement for when they do a full release.

Some final notes on Gray Zone

While the voice acting is horrible, the music is actually fairly decent. Nothing to write home about, but it’s got a nice feel to it with the atmosphere of the game.

That’s one of the few positives I can think of, honestly, but it IS in early access, so keep that in mind.

We’ll just have to wait and see what changes between now and the final release. Stealth has some promise, but needs to be improved. The mechanics for seeing what’s around you aren’t great, but the indicator for potential enemies is innovative. Combat is just as weak as the dialog in many ways.