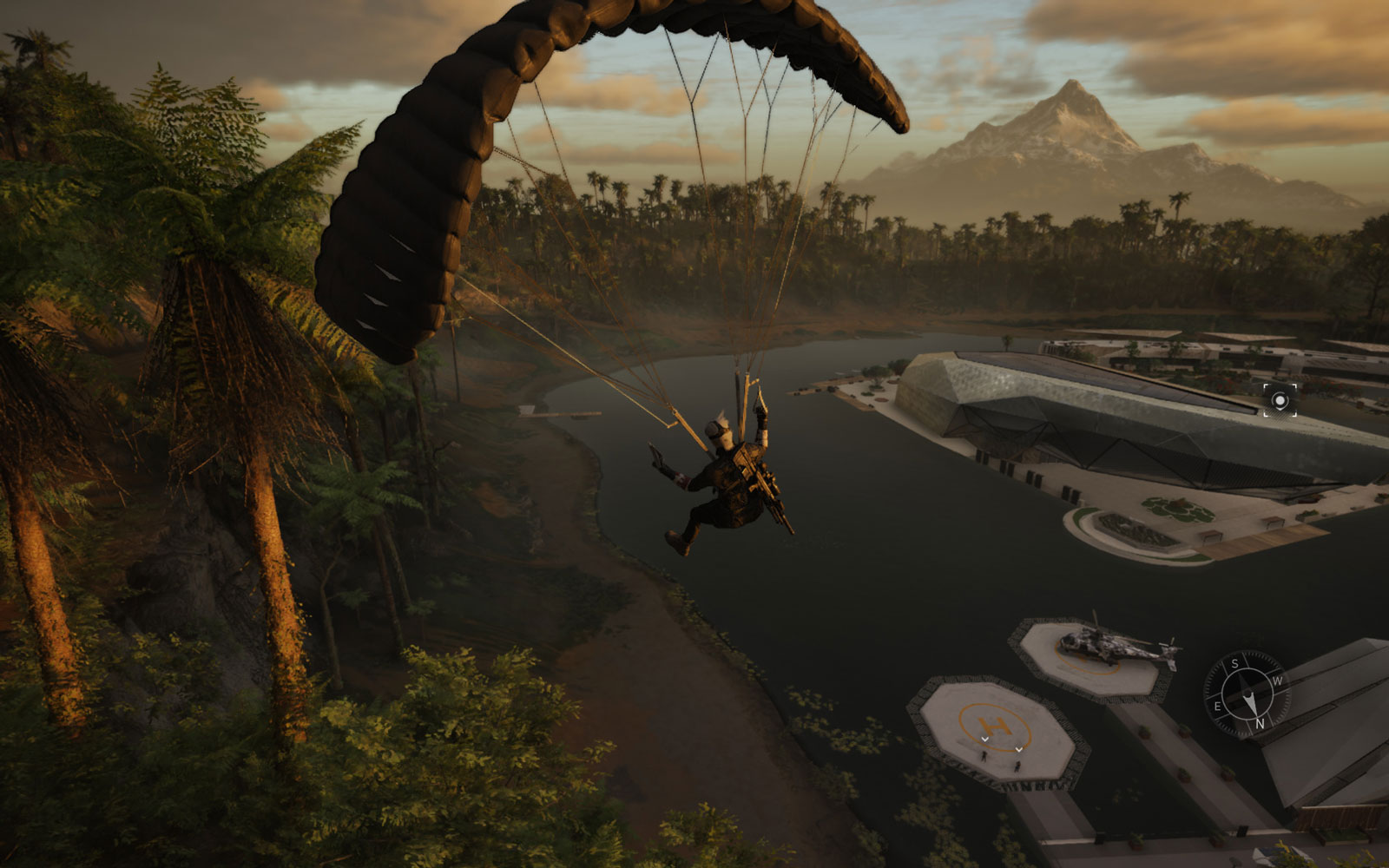 Part 1 covers my experience maxing out the Echelon class, but isn’t required reading for this.

As the sun slowly creeps further down against the landscape, we’ll be following my experiences as I works toward my goal of sabotaging Skell’s computing and intel network.

Initially, the mission requires collecting intel in the Cape North area; the campus within Lake Kathryn is an ideal source for a variety of intelligence, and should prove fruitful if I can make it happen without drawing every single foe on top of my location.

Thankfully, intel was easily acquired; after dispatching a few of Sentinel’s “finest”, I was able to acquire some intel on a secondary objective right where I was. I needed to destroy 2 supercomputers located on the campus.

Just across the walkway, I was able to find one who had information. After kneecapping him with my pistol I was able to begin extracting what little information he had on my primary objective.

Now that I’ve got the location of my primary objective, I can work towards completing my secondary one. Thankfully, I’m already in the right spot to do so.

On the second floor of the building I was next to while interrogating the Sentinel soldier is one of the 2 supercomputers. I slowly make my way up and deposit a block of C4 right on the rack for the supercomputer.

Now, on to the second supercomputer; This one is located in the oddly-shaped 4 story building at the top floor. I swim across the lake and climb up into the patio seating area, scanning for targets as I move, keeping my head on a swivel as I enter the building and climb the stairs.

I only take out 1 target on my way up the stairs, but apparently that one was enough to get spotted; I’m now in a bit of a rush. I drop a mine at the top of the 4th floor stairwell and move quickly up to the last supercomputer.

After planting the final block of C4, I move out in a hurry before I get discovered, dodging patrols looking for me and jumping out into the lake after I trigger the detonator on my C4.

I’m not completely done with the campus, yet; my primary objective is a decent jaunt away, and I’d like to finish while we’re still operating under moonlight. Thankfully, at my initial infiltration, I spotted a helicopter I can borrow to get to my objective.

I’m now off to the AI Experimental Center to hack Sentinel’s network and set their intel operation back significantly in the area. I set down well outside the objective and begin scouting with the drone; the area is heavy with Sentinel personnel and drones, so going in fighting isn’t going to be ideal. Thankfully, though the objective is on the other side of the base, there isn’t a large contingency of guards or drones watching over it.

After slowly creeping my way around the base, I finally reach the building with the laptop that is my target. I activate my sonar vision to see what I’ve got to deal with inside.

Thankfully, there are just 2 soldiers inside; easily dispatched with my pistol without alerting anybody else. I slowly creep my way around front and get inside. After easily popping each soldier in the head I hack in.

As I finish my objective, I get out the way I came in and escape with my foes none the wiser for now.

This was one of the more “plausible” experiences you can have in Breakpoint when trying to emulate the classic Splinter Cell games; Stay tuned for part 3, which will cover general thoughts on my experiences.