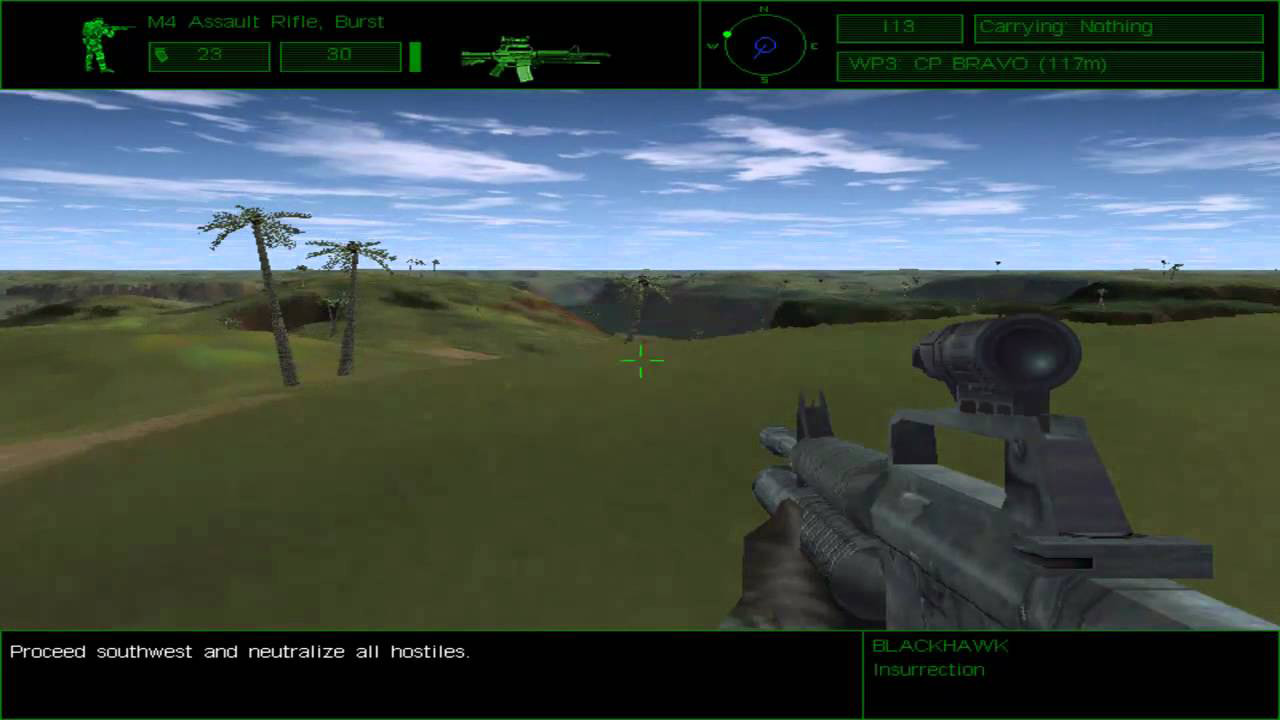 I loved the look of voxels in the morning.

Delta Force was a.. Well.. force in the military shooter gaming experience when it came out. Released by Novalogic, a developer who also created numerous great military flight simulators, really revolutionized gaming with it’s release.

I remember playing multiplayer with a couple friends as would team up; one or two would perch upon a mountain, scanning the other elevated positions for movement and covering the centralized area while whomever was left infiltrated the inner camps, placing claymores and hoping to not receive a sniper’s bullet to the head.

This was the first game that also reminded me why I loved shooting: It had genuine bullet drop physics. Sure, there was no windage to deal with, and the “scope” was a little window in the upper corner, but it was a start.

For snipers, you had 2 choices: The Remington M40A1, and the Barrett .50 cal. Both bolt action, but they fired as if they were semi automatic, which was disappointing, but the gameplay was still fun. If you were more of a multi-roll shooter, the classic M4 worked well.

Actually, you could kinda use every weapon for long range shooting in a way. I remember I got really, really good at laying out snipers using the MP5 by lobbing a barrage on them from a good long range, having familiarized myself with the amount of drop it had a bit too much. Sure, I’d blow through at least half my mag, but when you’re under fire, you’ll do anything to succeed.

Spotting an enemy was actually pretty easy; While the voxel technology was revolutionary for the time, the lower resolution of the game and the ability to render at such long distances meant that any movement at all was fairly clear if you knew what to watch for. Even better, if your target was a poor shot and tracers were enabled, you had a clear line to your opponent.

Singleplayer was a bit weak; AI for both your team and the enemy was pretty bad, but that was par for the course given the scope of the maps: They were huge, which was another reason I loved the game. The size of the maps even put some modern shooters to shame, especially given the open nature of them, allowing you to approach an objective however you saw fit.

I miss those days. I remember many, many years ago deciding to hop in and give it another go; multiplayer servers were still active, so I joined.. And found it overrun with cheaters.

That was another failing of classic games; back then anti-cheat protections weren’t even an afterthought.

If there was any game I’d love to see a reboot of, it would be Delta Force. As long as it doesn’t become another Modern Warfare or Call of Duty, on-the-rails singleplayer, quickscoping run-and-gun multiplayer experience, it could bring a refreshing breath of air to the military shooter genre.

Get Delta Force below and help support GGN.

Ghost Gamer History is a look at the classic games that came before the Dishonoreds, Armas and other modern stealth/sniper/tactical games. Let us know what you recall from your Ghost gamer history!