A challenging stealth game with a classic look and modern mechanics 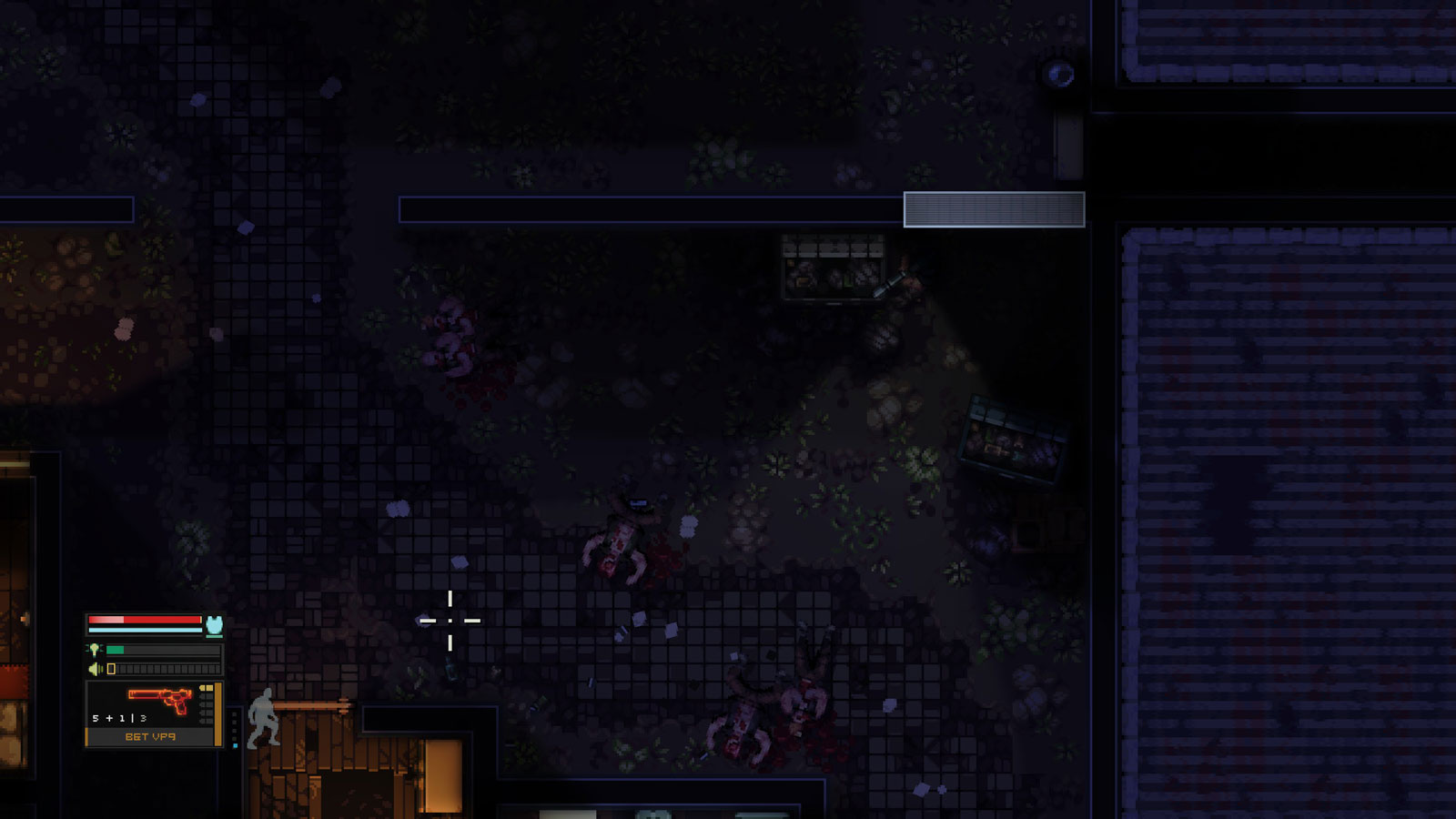 I’m going to apologize in advance here, folks. This review is going to contain a lot of reminiscing about the old days of gaming. Days where games were, to quote the youth of today, “hard AF”. Before the phrase “git gud” came about, and when the internet was for the more technically inclined (no AOL CDs were clogging our mailboxes back then).

When I was a child, I was stuck at home quite a bit. I was sickly (well, I still am, but that’s besides the point), and spent a LOT of time trying to find my own fun.

I spent so much time playing games that I got really, REALLY good at some of them. Not to brag, but I figured out a method for beating every single level in Dig Dug (even with my eyes closed), and played for so long in one sitting that the TV started showing weird colors until it (briefly) crapped out.

Intravenous is billed as “A love letter to early Splinter Cell games”. So, when I say Intravenous hearkens back to the days of classic gaming, I hope you understand that I don’t mean the days of Half Life or the first Counter-Strike. Nor do I mean the days where strategy was just a consideration of “do I go left or right?”. No, I’m talking like the time I rented a game (which I can’t even remember the name of now) where you could start the game, place a knife in your mouth like a badass, and dive into the water only to find you ended up killing yourself because you put the knife in your mouth the wrong way.. And this was in the first level (the first person in the comments to help my addled brain recall what it was will get a free copy of Intravenous from me).

It plays out with a story that even feels classic, my friends. Your brother is killed by drug dealers, and you’re out to play avenging angel (or devil, depending on your perspective). The delivery of the story is through text-based dialog and beautiful cutscenes retain that lovely retro art style, as well.

Intravenous is classically themed, but you have modern options

I’m not afraid to admit that, after about 5 tries, I decided to drop the difficulty down to easy. I’m not a young gamer anymore, and given my limited time available to play new games, I wanted to get as much of this game in as possible.

Just the fact that the game has difficulty options brings me joy. While it has a more souls-like challenge overall, it doesn’t have to be experienced like a souls-like (although I still failed plenty on easy).

No, this is classic gaming with modern sensibilities. While the graphics are clearly a throwback to the retro gaming world, the gameplay and options are decidedly modern (without sacrificing mechanics for immersion; more on that later).

There is even an option to utilize your own microphone to create distractions, rather than the traditional whistle/throw rock.. And distractions can be hilarious. Want to emulate a guard’s wife? You can absolutely do that. There’s no real benefit to doing it that way, but just the fact that the lone developer decided to give you that option shows you the level of detail that went into crafting this game.


How does stealth work in Intravenous?

Stealth is done beautifully here, with detail rarely seen in even modern games. You’ve got to deal with light, movement speed, and even what you’ve got equipped to maintain stealth. Your gear itself can cause you to make extra noise when moving. Hell, even reloading creates noise! This is the first game I’ve ever played where just the act of reloading your weapon is enough to draw attention.

Going even further, if you decide to drop a body, you’d better make sure nobody else is nearby; they will hear the body drop. Don’t just leave it laying around, though – be sure to dispose of it properly! Once guards are alerted, they’ll really make an effort to look for you.

In fact, you can get spotted even without knowing there is someone watching you; if you’re illuminated enough (or making a lot of noise), guards will see you from just beyond the screen’s coverage, so be prepared for that!

If you do alert somebody, extinguish lights (by either shooting the light out, or, ideally, flipping off the light switch) and hide in a room until the coast is clear. Even then, you’ve got to be prepared to deal with the patrols, so if you can find a good escape route through vents and the like, take it.

If things go loud and you don’t have any other options, you can absolutely go guns-blazing.. Just know that it will get even more challenging when you do so. Guards will swarm you fast, so hopefully you’ve managed to take at least a few out before the situation goes pear-shaped.

What about the general gameplay and weapon mechanics in Intravenous?

Gameplay, in case you haven’t figured it out yet, is fairly challenging. This isn’t an Ubisoft title with simplified “immersive” mechanics: This is a title with a lot to show you in very little time, so you’d better pay attention.

It honestly reminds me a lot of the classic SNES Shadowrun game in that regard. Movement is handled by the WSAD controls, while direction and aiming are the domain of the mouse. It doesn’t take you long to figure out the basics, but you better master them quickly; fast reflexes are going to be critical here.

With the variety of actions you can take here, you might worry that you’ll have to do some hand gymnastics in order to reach every key necessary (I’m looking at you, Arma 3). In reality, however, many environment interactions are done via context menus when you approach something (or someone) you can interact with (or kill). Doors can be slowly opened, or kicked in, as an example (or picked first, and then kicked in). At first I wasn’t sure about this given that it can slow down the flow when you’re just getting started, but honestly, I think it’s a good thing; you need to think things out as you move.

Gunplay is spectacular, too. You can get a variety of weapons after the prologue thanks to a mysterious benefactor who’s goals appear to align with yours, and each weapon has a number of stats to consider, along with any other equipment you take with you. You can be loud and carry an M4, quiet with a tranq rifle, or even a mix of both.

Beyond that, there are extra challenges that encourage replaying levels, which should satisfy those of you who continuously replay Splinter Cell in order to complete no-kill challenges.

Well, it sounds like this game is just perfect.. but there are negatives.

You’d be forgiven thinking that I have nothing but praise here for the game, but there are a few minor things I’d like to note that can be considered a negative.

First off, it has been a very long time since I’ve played a truly classically-challenging game. That means I failed.. Constantly. Combine that with forgetting that I can save means I would get fairly deep into a mission, only to die and start from the very beginning again. That’s one aspect I’d rather not see retained from classic games.

Next, sometimes the sounds just felt like there wasn’t much impact. Music design is fantastic, and in general the audio is good, but if there is any point in this game where things weren’t perfect, the sound design is it. Still, given it’s an indie game, I’m willing to give it a pass considering just how good everything else is.

Additionally, learning every mechanic in the game takes time, and retaining it can be hard if you get distracted easily (so, if you’ve got people or pets vying for your attention, be prepared to continually look up controls or game guides).

Finally, despite this being a retro-styled game, there is one thing I miss from modern games: A cover system. Sure, I can hide behind a wall, or even go prone, but there is no middle-ground here. Being able to crouch behind something and just pop up to return fire would be a perfectly welcome addition.

None of these are truly game-breaking, though, and honestly, even if all of these were bigger negatives to you, I would still recommend it.

Let’s get things summed up, though, before I make any more references to other games, classic or not.

Should I buy Intravenous?

If you love challenging (and I DO mean challenging) gameplay, retro stylings, miss old-school games, or just want a game that has really, really good stealth mechanics that’ll chug right along on a below-average gaming machine (my RTX 3070 rig was overkill for this), Intravenous is definitely for you.

If you hate retro-style games or are excited about the direction the Assassin’s Creed or Tom Clancy games have went, you probably won’t like this.. But you should still buy it, because you never know when you’ll finally wake up from the coma you’re apparently in (clarification: It’s ok to not like retro-style games. Ordinarily they aren’t my bag, but Intravenous is just that good).

Grab Intravenous on Steam and support small indie developers. Roman Glebenkov, the developer of Intravenous, put a lot of work in here, and it shows. The best part? He’s not even done. There are plans for expansions, and even a second game down the road should things go well here.