Is Generation Zero Worth Playing in 2023?

Generation Zero has been out for years now; has it improved since the initial release? 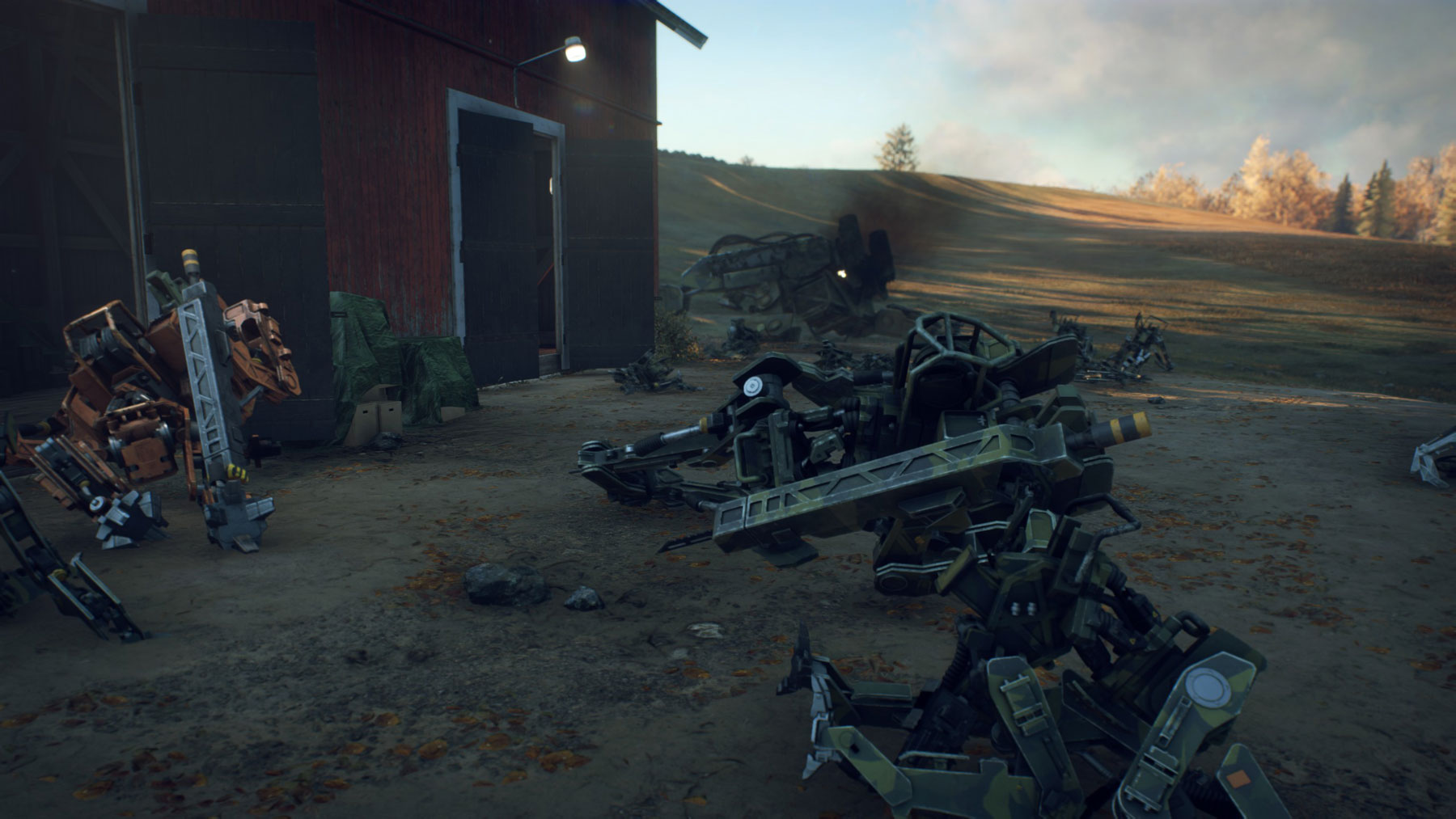 When Generation Zero came out, it had a rocky launch according to many gamers. Bugs were prolific, the gameplay occasionally frustrating, and.. Wait, am I talking about Ghost Recon Breakpoint, which came out the same year?

No, we really are talking about Generation Zero, or, as I like to call it.. “Ghost Recon Breakpoint: Oops, all drones!”

Let’s get into the review and decide if Generation Zero is worth playing in 2023.

I never played Generation Zero until a few weeks ago.. I just never had the time when it first came out, and I kept putting it off.

It turns out it’s a good thing I waited until now to play; the game has been polished significantly over the years, patching numerous bugs and expanding the gameplay with multiple DLC that add a lot of life to the game.

In fact, there is so much to do that I feel like I’ve barely scratched the surface after about 35 hours of gameplay.. Which in many ways is a good thing.

Assassin’s Creed Valhalla has a lot of “ugh” length to it: Traveling, repetitive actions, and more all make the game feel longer than it should be.

Generation Zero – while it does have “grindy” tasks – feels much more interesting and unique as you go. In fact, those grindy tasks are all fairly optional. You can just do whatever you like, and in fact, that’s absolutely what you should do after leaving the archipelago (which counts as the “tutorial region”).

You are a young adult back home in Sweden in the late 1980s after vacation, and have found the country went to shit while you were away. You will collect guns, ammo, tools and more in order to survive and figure out what happened, fighting robots and dressing like an 80s movie extra at the same time.

Sometimes, however, it’s better to avoid a fight, which leads us into the usual discussion GGN readership cares about: The stealth.

Here’s one big reason I’m kicking myself hard for not paying attention to this game sooner: The stealth is fantastic.

It’s no Splinter Cell or MGSV, but it’s got a fair amount of extra detail compared to more traditional stealth games.. And no designated tall grass to hide in.

Stealth is all about managing your noise and general visibility, which is modeled exceptionally well here. While that sounds fairly basic, things like line-of-sight with brush and range of noise are all just slightly more detailed than you’d expect.. And I’m STILL trying to break it all down so I can put together a detailed guide for you all.

Weapons create noise, and it’s fairly significant, too. While suppressors (depending on the quality) do have a bit of a magical aspect to how much they reduce noise, it’s at least plausible this time since you’re fighting bots with different levels of perception as opposed to human-modeled foes.. And unsuppressed weapons? Well, they are REALLY well modeled here. A 50 BMG cartridge has a seriously nice boom that makes me feel like I forgot to wear my ear protection at the range.

Sound design in general here is spectacular overall, too; the world is immersive and sound plays a major part of that.

There are other interesting aspects to stealth, too.. Escaping combat earns you XP, bikes give you a stealthy way to travel (while a bit arm-wavy, it is appreciated), and distraction tools do a lot to give you options as to how you play, whether you’re solo or with friends.

Let’s talk about the weapons and combat next.

How are the weapon and combat system modeled in Generation Zero?

I had heard that Generation Zero included detailed ballistic mechanics, but let me dispel that myth for you right now: It doesn’t.

I’ve engaged targets at 300 and 400 meters and saw no bullet drop from 7.62 rounds out of the semi-auto rifle options, which just isn’t real.

Also, as an aside: 300 meters in Generation Zero is accurately modeled unlike in Ghost Recon Breakpoint. 300 meters in this game feels like a significant distance.

With that out of the way, I will say overall the weapon systems feel good despite this. The attachment system is good, and the quality mechanic is just fantastic as part of a survival game. A 1-star scope will have dirt, grit, and cracks, while a 4 or 5 star optic looks fantastic.

Combat itself in the early game is rocky; you’re basically just spraying rounds and hoping to hit something vital. As you progress, though, you learn the weak spots of some of the more common enemies, and are able to surgically eliminate some foes with one or two shots.

The bigger foes, however, are going to take a lot of rounds and higher quality weapons and ammo.. Especially the rivals.

Rivals is a mechanic that causes special versions of enemies to sprout up and become more powerful the more enemies you eliminate in a region. These rivals have unique names and can take a lot more punishment than standard foes, but they also drop extra special loot that you’ll definitely want to pursue later in the game.

Big foes in general tend to require a little more strategy than shooting; while you can certainly find a good spot to engage from and just spray rounds at them hitting their weak spots, you’re almost always going to be better off starting out by luring them into traps, utilizing special items like flares and EMPs, and in general try to be smart with these engagements so you don’t just waste all your ammo, especially when playing solo.

Let’s talk about that, shall we?

Is Generation Zero worth playing solo?

Generation Zero is designed as a coop game, but it is absolutely worth playing solo. I myself am getting up there in years, so my twitch reflexes are pretty minimal, but even I can handle a lot of these engagements all on my own.. Even when they hit the fan.

I’ve only died once in this game (as in I didn’t use adrenaline to revive myself), and that was as much by choice just because I was in an engagement that I wasn’t going to be able to get away from easily.

Death has little to no penalty; if you die, you just select where you want to respawn. Want to make sure you respawn closer to where you died? Be sure to drop a portable radio beforehand to act as a spawn point.

The bigger engagements with multiple hunters (a standard enemy and the lowest-tier one that can become a Rival) can be unwieldy, but be smart with cover and you’ll be fine.

I’ve even handled combat against 2 tanks with multiple hunters and came out from them admittedly low on ammo, but still alive.. And boy, was it a fun challenge!

The RPG mechanics of Generation Zero

Generation Zero is also an RPG, which means experience points and a skill system.

Overall, things are fairly basic; few skills are anything game-changing, although many are going to be useless for a solo player. That’s a good thing: The max level is 31, which means you’re only going to have 30 skill points to use. There is a respec system, at least, so you won’t feel like you screwed up and have to start over from the beginning.

There is a hacking mechanic that, at first, seemed extremely interesting.. Until I discovered that it’s got a fixed percentage of success depending on the classification of the machine. While it can be expanded to allow you to turn enemies against each other, the success rate is so low for the times it matters most that it’s just not worth it.

Stealth and combat skills tend to have a fair amount of use, and there is even a set of skills that allow you to boost your carry weight (which is absolutely critical for everybody, honestly).

Finally, there is a sort of specialization skill system where if you max out a line of skills, you can select a top-level related skill to be active that gives you special abilities, such as the aforementioned hacking skill, eliminating scope sway, or boosting your initial attack damage from stealth. These will help you tailor your character to your play style, while not necessarily making any one method OP over another.

Not everything is sunshine and roses, however; let’s wrap things up and talk about the negatives.

Overall, while I enjoy the game, it’s not without issues.

Graphics are hit & miss; textures can be pretty low quality, there are occasional performance issues still, and lighting quality is iffy.

Bugs still exist, too. I’ve seen the AI glitch out quite often, especially for enemies like tanks, who will occasionally just stand in the same place and stomp periodically before they try to blast you with whatever weapons you haven’t shot off yet.

Outside of that, however, is a world that is absolutely alive despite being populated almost exclusively by giant robots.

Some machines will fight each other (that’s as close as I’m going to get to a spoiler here), and you can hear the sounds of that combat as you get deeper into the world.

Exploring is fruitful; while many houses have similar layouts (except for one I found that was a 5-bed-no-bath), there are spaces of devastation from the war where corpses of both humans and machines litter the battlefield, whether in a literal field or in a Swedish suburbia, where there are signs of life abandoned in hope of finding refuge elsewhere.

The storyline is almost completely forgettable; it’s very much an 80s B-movie story, but the fun is in the discovery itself, and exploration.

I will say this: If you are an obsessive hoarder of loot, you’re going to have to train yourself a little better here. You can only carry so much, and can only store so much, so you’ll want to avoid carrying 5 of the same rating shotgun (when you may not even use one of those shotguns).

Let’s get to the TL;DR portion.

Is Generation Zero worth playing? The short answer is..

If you like Ghost Recon Breakpoint, survival-lite games, and just want something fun to play for an extended period while you wait for something else to come out, absolutely.

If you want a game you can pause, want the prettiest graphics around, hate the 80s, and want to play this as if it were the latest Call of Duty.. Skip it.