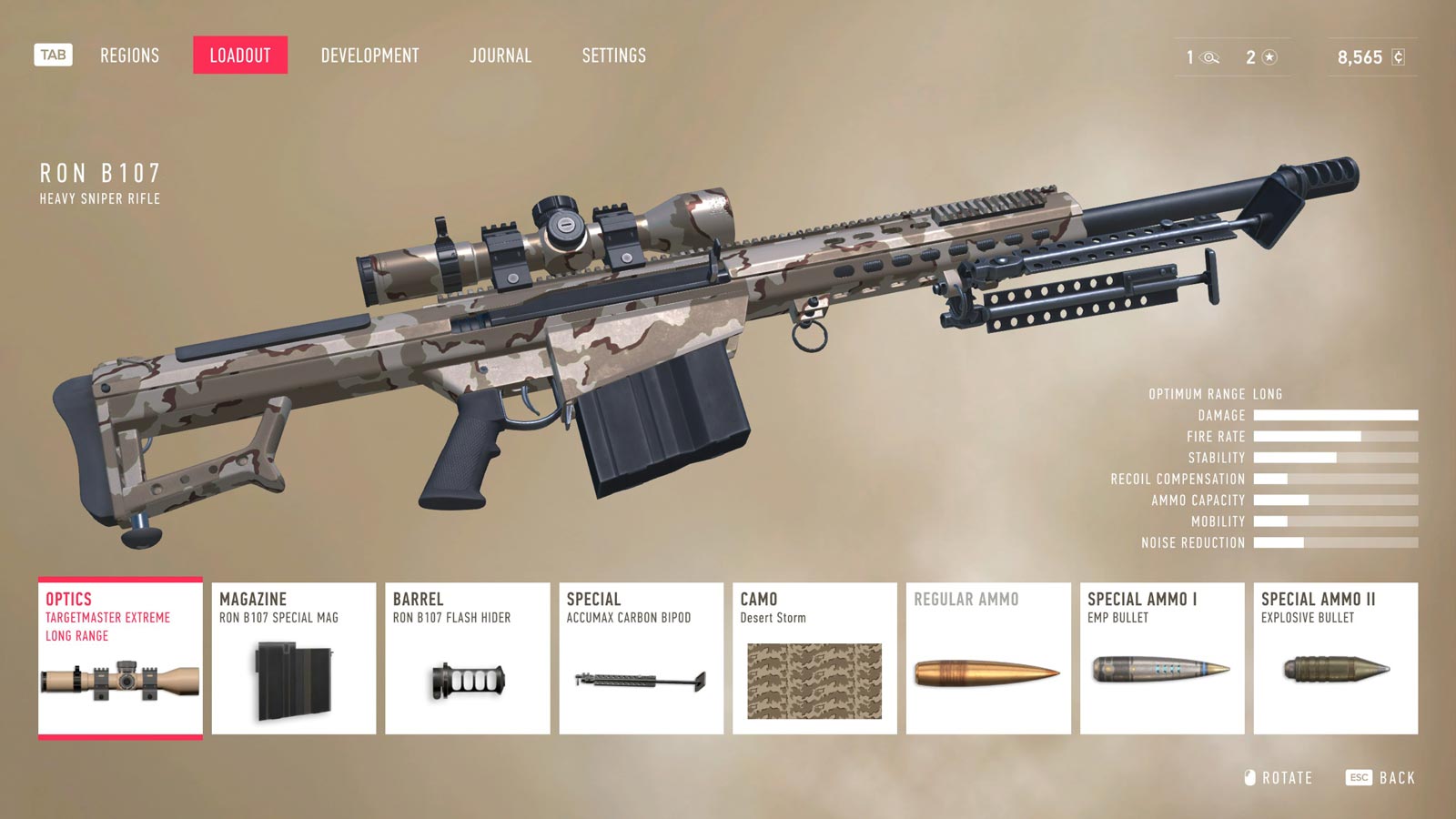 Heavy rifles in SGW Contracts 2 are somewhat limited, especially if you don’t have any DLC weapons. They are also, without a doubt, the most damaging (and loudest) rifles in the game. Pretty much any walking, talking foe will go down in a shot anywhere on the body with one of these. How does the Ron B107 stack up, fully upgraded? Let’s take a look.

Given that this is a heavy rifle (and one you’ll acquire typically in the late game), a maxed damage stat is not surprising. That and the fire rate are the best features here regarding general performance: The Ron B107 is a semi-auto heavy rifle, and the only one of it’s kind.

The rest of the stats are pretty average to low, but honestly, these can be overlooked. Stability is fair fully kitted out. Recoil compensation is abysmal (which is amusing, given that the rifle is listed as “Extremely Heavy”, and heavy rifles typically handle recoil much better in the real world). Ammo capacity is just fine. Mobility is low, but really, you shouldn’t be running with the Ron B107 active (always switch to your pistol/secondary when moving around, as you’ll move faster).

Noise reduction, though, is an interesting one. In my early testing before I upgraded the rifle I BELIEVE this rifle will be detected within 1km (which some long-shot contracts have as a long-range engagement area, such as the final mission), so make sure to you follow my recommendations below for equipping it!

Finally, the biggest draw for the Ron B107 is that you can use any and all of the special ammo. This makes the rifle your go-to for completing numerous challenges on long-range contracts!

Special: The Ron B107 can equip a bipod: This helps with overall stability, so definitely grab it. You’ll want it for long range contracts.

Barrel: You’ve got 2 choices here: A muzzle brake or a flash hider. While the recoil compensation of the muzzle brake my seem appealing (and it is), if you’re engaging sub-1km targets on the long range shooting spots, I’d actually suggest the flash hider in some contracts. You get a little extra mobility out of it, too, along side the extra noise reduction.

Magazine: Like all the rifles I’ve tested thus far, you’re relegated to either higher magazine capacity or an additional magazine for special ammo. Given that you can pick literally anything out of the special ammo, and that you’ll most likely be using this one to complete challenges, grab the special magazine ASAP.

Optics: Optics wise, like all sniper rifles, you can grab short, medium, long, and extreme long range optics. The extreme long range optic for the Ron B107 has a max zoom factor of 35x, which is fairly significant. This means when you’re working on getting the longest shots possible, you’ll be able to comfortably see your targets and line up the shot, OR be able to spot targets easier through partial cover to land that headshot.

General thoughts on the Ron B107 in SGW Contracts 2

Balancing-wise, the Ron B107 may seem like the king of all rifles, but realistically, it’s only solid strengths in most engagements are going to be it’s rate of fire and the fact that you can grab any special ammo you like. The damage stat can pretty much be ignored on heavy rifles; they hit hard enough that any soft target will go down with a single round anywhere.

Even then, that doesn’t mean it’s the sole best rifle available. While it’s great for you if you like to be consistent in your rifle usage, given that it’s a heavy means you’ll be relegated to long-range contracts (unless you like enemies swarming at you).

Given the generally limited options on heavy rifles, though, if you want to grab a certain combination of special ammo to complete multiple challenges after beating the game, this rifle is probably going to be your go-to.. However, don’t rush to get it. It won’t make completing the game any easier.