Easy ways to earn Moneda, cash, materials and more without even being in the game 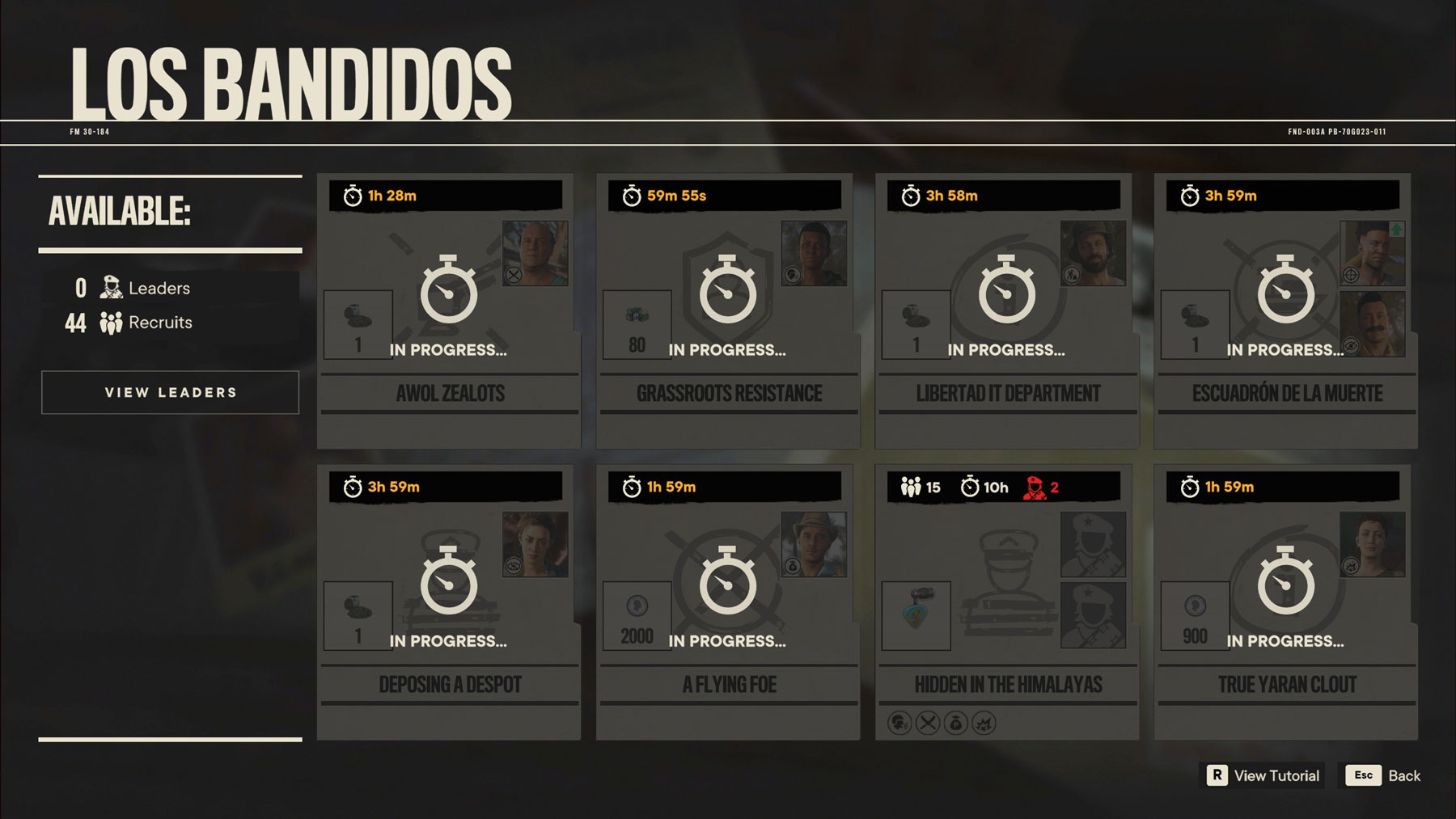 Far Cry 6’s Los Bandidos mini-game is the #1 reason I even open the game after completing the storyline. Why, you ask?

It lets me continuously earn nearly every major resource in the game, including moneda, while I’m off doing real world stuff.

Let’s break down the core mechanics here and get into the winning strategy for Los Bandidos.

How Los Bandidos works (and how to win)

First: You absolutely need to build the Bandidos Barracks in your Guerilla camp ASAP with all of the upgrades. This not only unlocks additional gear for sale through the vendor, but also gets you more recruits through various actions and have a better chance of success for your squad orders.

Also, grab as many Los Bandidos leaders as soon as you can. Once you unlock the barracks you’ll get just 1 leader, but there are 8 total you can recruit throughout the game. Some are through main story missions, while others are through Yaran Stories. The more recruits you have, the more missions you can run (and with an appropriate leader who has the skills needed for the particular mission).

Each leader will have 2 skills: One that directly applies to one of the 3 squad orders available at each step, and one that is a passive bonus.

Some missions, like the one above, will require 2 recruits. If the reward is something high-priority, like moneda, go ahead and fill both slots with leaders that have useful skills for the mission, but one important thing to note is that Reckless should be avoided for absolutely critical missions: The squad orders that utilize Reckless tend to have a high chance of losing recruits, which can be very painful early on and require you to go out and fetch more recruits.

Anyway, once you send your leader out with their recruits you’ll have to wait for the timer before you can begin issuing orders.

Once the timer is up you can start issuing orders. Most standard missions have just 3 steps for orders, but some will have 4 or 5.

First things first: Pay attention to both the percentage and the losses. For example, in this first step, I could choose “Sow Some Seeds” and potentially lose up to 4 recruits, with an 85% chance of success. However, losing recruits early on isn’t ideal: The final squad order set may require more recruits than you have left for the best chance of success.

Instead, I went with “Feathered Friends”: This has a minimal medicine resource cost, of which I have a very large amount.


When making a decision, I usually suggest avoiding any order that has less than an 85% chance of success unless you don’t have a choice.

When you fail an order, you can get a debuff on your leader reducing their overall chance of success with every step by 10%. You can still occasionally net some partial reward. Also, in later orders your leader can become injured should you fail, or even cause the mission to be aborted completely.

It’s usually a good idea to go with boosts to chance to success on the first and second step rewards. Recruits are also a good option, as they can offset any losses you incur with your choices during the mission (they become immediately available during the mission itself, as do resources like medicine, oil or metal).

Assuming you waited for multiple missions to be completed around the same time, consider choosing the intel rewards on steps after ensuring you have a couple available missions waiting for you. This should typically be selected towards the end of the mission in later steps.

Finally, pay attention to how much gasolina you’ve got: This resource is one of the rarer ones in the game in my experience, so avoid choosing that option unless you’ve got nothing better to go with. I’ll frequently choose an order that has an 85% chance of success over anything gasolina-required, even if that one is a 100% chance of success, just so I can ensure I have gasolina for this next section..

First: You’ll need to hop in multiple times a day in order to do this. I myself hop in first thing in the morning to clear out my missions I launched overnight and set up missions to run while I’m at work. Since I work from home, I also hop in during my lunch break to do the same. I then get back in after work, schedule more missions, and come back for the shorter-running ones before bed.

When choosing missions with the goal of earning moneda, you’ll want to typically pick the single leader missions rather than ones that require two. These typically are faster missions, and they allow you to clear out more missions from your available queue faster.

Don’t worry about the specific rewards unless you need something special. I almost always focus on gun powder, as you’ll probably want more of that for the rewards from the black market than anything else. Without even trying I’ve gotten more of everything possible than I could actually need thanks to Los Bandidos missions.

Additionally, make sure you’ve bought every single weapon and piece of armor available in the game from standard vendors! These can show up as rewards for missions, so buying them outright as soon as you can (if you haven’t already earned them, and even if you don’t want them) ensures you’ve got more chances to get useful resources like Moneda.

That’s it, folks! Get out there and start winning the Los Bandidos mini-game!