How does the 3rd iteration of the stealth hacker game stack up? 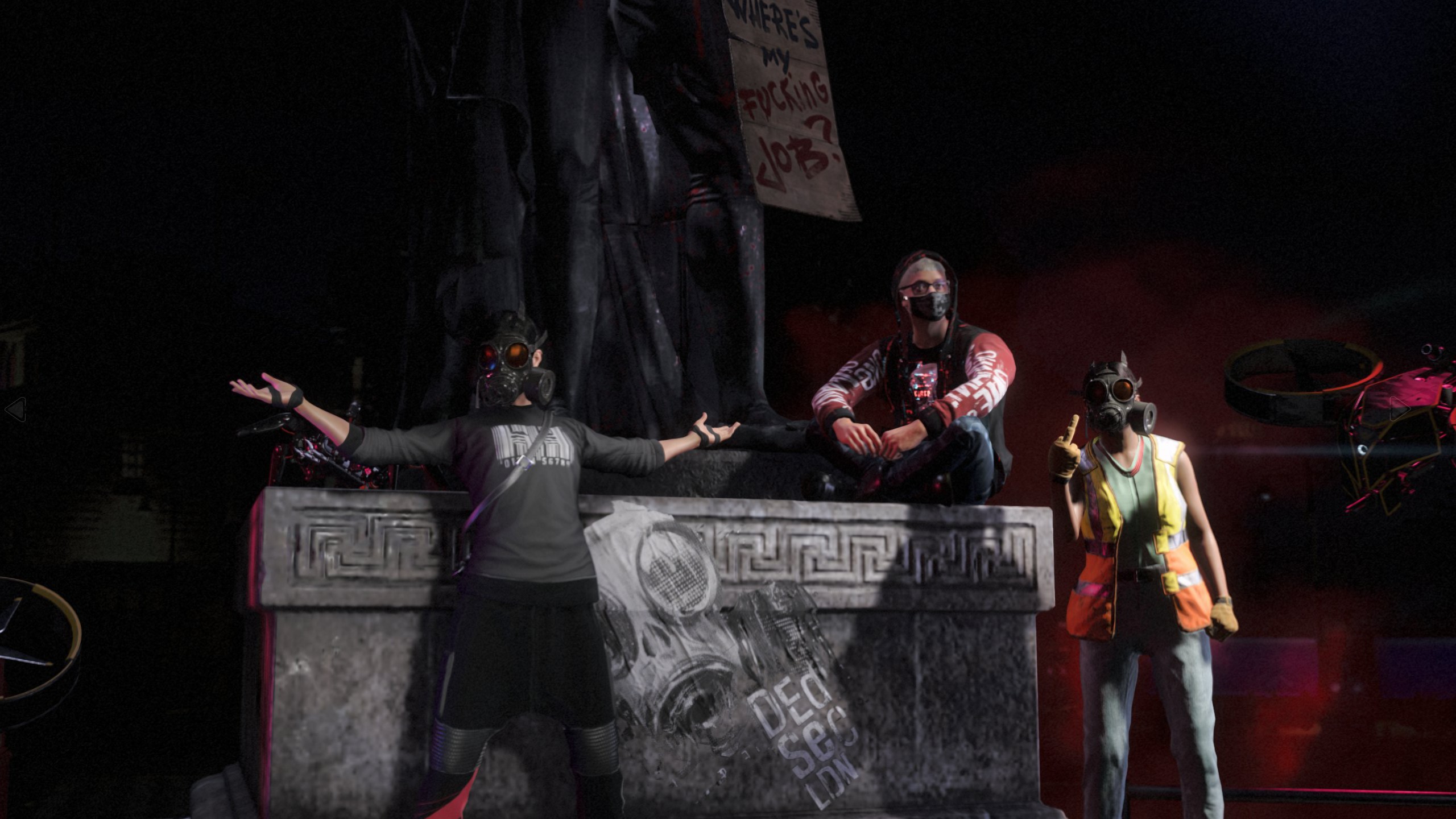 I have to admit.. I never got into the first 2 Watch Dogs games.

They felt like a GTA clone with some clever mechanics. The second was better, but the story just never captured me.

Watch Dogs: Legion, however, has grabbed me with it’s stealth & hacking mechanics along with the unique character system that, spoiler alert: works VERY well.

Everybody and their mother will be talking about the every-NPC-is-a-PC mechanic, however, so let’s talk about what we love here at GGN: the stealth mechanics of Watch Dogs: Legion.

Let me say this: If you’re looking for the next Splinter Cell or Assassin’s Creed, you’re going to be disappointed. Watch Dogs: Legion takes an almost Hitman-style approach to stealth, where you essentially can hide in plain site in many cases.

There’s more available, however, if you prefer to actually hide in the “shadows” so to speak.

Utilizing the cover system works well. That’s an almost basic requirement for stealth gaming now, and I’m glad to see Watch Dogs: Legion has done what it should’ve in this regard. Merging the styles of Ghost Recon Breakpoint and The Division, moving around and popping in and out of cover is an easy affair.. Which is good, because light & dark seem to have no impact on stealth, nor is there any tall grass to hide in (finally, a modern stealth game without tall grass).

There are also a number of tools at your arsenal; the AR Cloak allows you to go vaguely transparent much like Ghost in the Shell, but it isn’t overpowered, having a time limit attached to it being active before you have to let it cool down. As well, there is an AR shroud for hiding bodies. Until you get that, though, you’ll want to make sure you take people down in places they won’t be easily discovered; no picking up and hiding bodies here, which is an obvious misstep. I realize not everybody can handle a fireman’s carry, but most could at least drag the bodies out of the hallway.

Spider drones and more are also useful, but frankly.. the AR Cloak is the official jam of GGN.

You really can play this game stealthily. In some ways it’s also fairly challenging; Detection times are fairly fast compared to other games, so you’ve got to think about how and where you’re moving when you’re trying to get past the enemies that inhabit the location you’re at.

Losing them, however, is surprisingly easy. It can take as little as 10 seconds after being seen to disappear from those searching for you. Even flying a slow construction drone, I had no problem hiding from enemies.

How good is the rest of Watch Dogs: Legion?

Let’s break this down here to some core mechanics that make up the game, starting with hacking.

Hacking in Watch Dogs: Legion is basically an exercise in point & click and simple mini-games. There is no real decision-making here; if you’re looking to decide whether you want to run a buffer overflow or SQL injection, you’re out of luck (and yes, I know what those are – many years ago I considered pursuing my masters in Info Sec). Still, too much realism in a AAA game would make for a very boring game.

Where hacking shines is in how it allows you to deviate from the standard mechanics of stealth or combat. Set traps, spy on people through cameras and drones, and distract enemies with what I am only assuming is goatse (dating myself a bit here) all work to supplement the gameplay, which is good. There’s a lot of things to hack, and plenty of results of those hacks. I actually, at one point, got tired of fighting the traffic of London and started making cars veer right to get out of my way.

Combat is probably one of the weakest aspects of the game; there are a few interesting bits to hand-to-hand combat, but otherwise, there isn’t much here. That’s OK, though. Even though you can play a spy or military operator as a PC, that’s not what the game is about. Gunplay is pretty lacking in detail as well; If you’re OK with GTA-style shooting, then yeah, this’ll be fine, but honestly, try to stay away from fights if you can. They are just.. Boring.

The story is.. “Eh”. It keeps up the pretense well, but in general is a bit much. I found myself caring less and less the further I went, finding it not quite as driving as it could be.

London is beautifully rendered, though, and exploring the city on foot is amazing. I’ve never been outside the US (I HATE travel), but there is a liveliness to it that creates so much more immersion, leading me to the one time I will talk about the main gimmick of WDL.

The NPCs-can-be-PCs mechanic is fantastically done for the most part, but just the fact that the city really is alive and breathing, with people interacting, conversations to be overheard, and more is just.. breathtaking. This is so well done that I only have one complaint:

The voice acting is sometimes.. Oof. My favorite recruit is also my least favorite to hear speak, because she FORCES EVERY WORD OUT LIKE THIS. It seriously sounds like she’s speaking in all-caps, and it grates on my ears. Many NPCs are like this, in fact. If you’re like me and have hearing sensitivity issues.. Trust me. Rely on subtitles.

For everything else, the game plays well. There’s some minor rendering bugs with clothing, but that’s fairly normal with customizable (and even procedurally generated) wardrobe. Hair looks ugly as sin, but that’s Ubisoft for you (they’ve never really been able to render hair properly in my experience). Performance is spectacular on my i7 9th gen with a GeForce RTX 2060 at 1440p. Loading and exiting the game, however, take forever, being almost “stuck” for about a minute after launching or exiting to the main menu. I’m sure this’ll be fixed soon, though.

Is Watch Dogs: Legion worth it?

The hacking, tools and NPCs-are-PCs mechanics are all very well done, and add in stealth that is good and approachable with a variety of methods to play the game makes Watch Dogs: Legion worth your time if you’re interested.