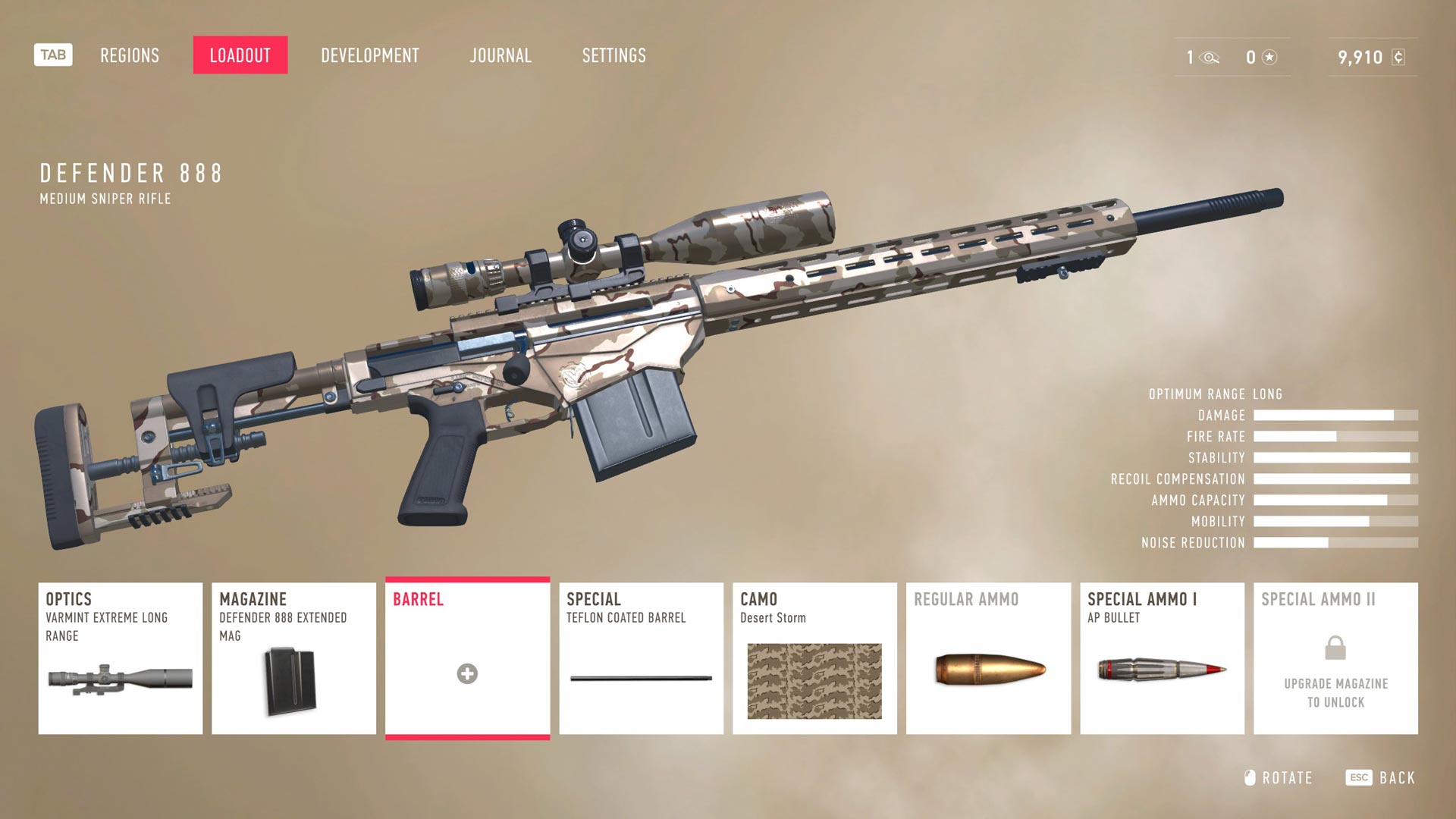 Note: The hero image for this post shows the rifle without a suppressor; this is due to a bug that occurred when I unequipped it to check stat variations, and was unable to re-equip it without purchasing the suppressor again.

The Defender 888 has a familiar design and some useful aspects to it making it a common early-game purchase for new SGW Contracts 2 players. How does the rifle stack up, though? Let’s break it down.

With high damage for a medium rifle, great stability, recoil compensation (despite it’s negative in the “special options” section when fully loaded) and ammo capacity, the Defender 888 is a solid option if you’re looking for something mid-range to tide you over in the mid-game with some decent versatility. When equipped with a suppressor this rifle is undetected until you hit the 21 meter mark, making it fairly useful in both long and short range engagements.

Ammo-wise, while you get a good capacity magazine, you are limited in your special ammo options; Armor Piercing is going to be a must-have with any non-heavy rifle just to take down the well-armored foes. Luring bullets can be good for drawing targets to an explosive object, and if you’re tired of compensating for your shots, A.G.I.L.E. rounds round it out.

Special: The Defender 888 can equip a teflon coated barrel, which boosts stability, recoil compensation and mobility.

Barrel: You’ve got 2 choices here: A silencer, which is fantastic given the 21 meter detection range while equipped, and a muzzle brake (which boost recoil compensation further at the cost of a little mobility).

Optics: Optics wise, like all sniper rifles, you can grab short, medium, long, and extreme long range optics. Always go for extreme long range. The Defender 888 comes with a medium-range scope by default, but honestly, you’ve got to be pretty desperate to decide to go that route. The max zoom factor of the extreme long range scope is 32x, putting this in-line with some heavy rifles, and is pretty usable at extreme ranges.

General thoughts on the Defender 888 in SGW Contracts 2

Overall, the rifle is fairly balanced. While the damage stat is high, even comparable to a heavy rifle, you need to keep in mind that penetration on these rounds will not be the same as a heavy rifle, so you’ll still be going for headshots in most cases unless the target isn’t wearing ballistic protection or you’re using AP rounds.

The fact that it’s got decent damage plus is relatively quiet (with the attached suppressor) is what will make this rifle more useful. The only real downsides here is the fact that you can’t load it up with EMP or explosive rounds.

If you haven’t done enough bounties to purchase a different rifle and just want an upgrade, this is a solid option, and like most rifles, can carry you through the entire game as long as you’re OK with it’s limitations and smart with your shots.