Until you start earning Moneda and catch some of the items from the Black Market, these weapons will do everything you need 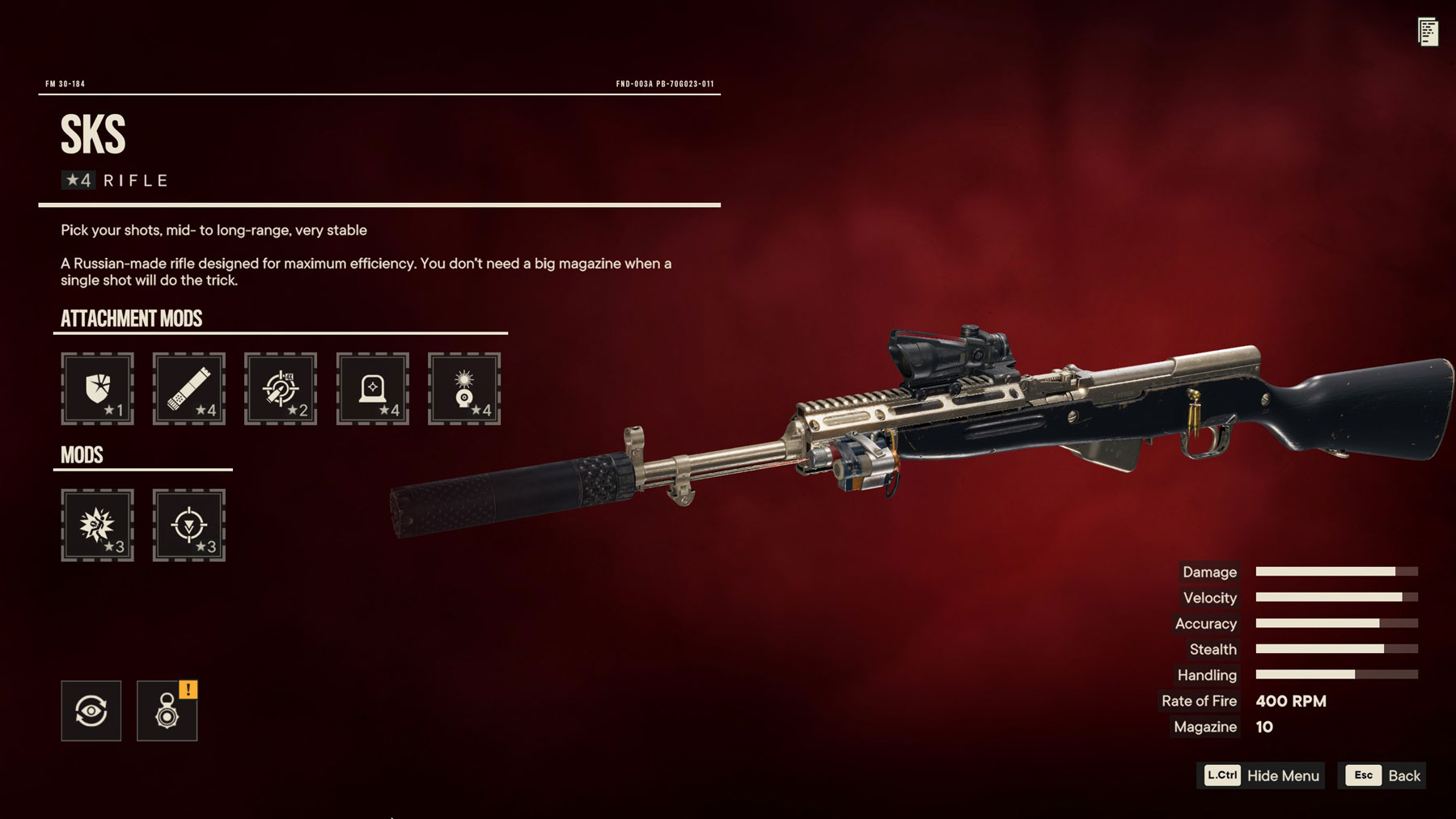 Far Cry 6 has a limited end-game, so optimizing your loadout in the early-game is critical. Here are the best standard weapons for stealth in Far Cry 6, plus information on how to get them.

Most of these weapons can be obtained from the Guerilla Garrison when you’ve maxed it out, so you should do that as soon as possible. Also, unless otherwise noted these weapons should be equipped with AP rounds; the rest of the mods are up to you!

With that said, let’s get to the weapons!

While only semi-automatic, the SKS has the best damage profile of the standard rifles. It does take a while to reload if you don’t empty the magazine first, but this rifle is the perfect segue from the MS16 L, and when fitted with an ACOG works fantastically for mid to long range engagements.

You’ll get the SKS during the Paradise Lost mission.

The MP7 is an absolute beast of an SMG with a high rate of fire, solid damage and manageable recoil. If you need something for close-range engagements, this is seriously going to be your best option until you can get ahold of the Libertad Custom Vector SMG from the Black Market. Accept no substitutes.

Get this one fast via the Guerilla Garrison.

While it doesn’t have the damage of the Desert Eagle, it does have a solid rate of fire and low recoil. As long as you’re going for headshots you’ll handle anybody stealthily with this pistol.

Get this via the Guerilla Garrison.

The Recurve Bow is honestly.. not great. However, you won’t be using this for standard combat: Instead, you’ll load it up with EMP arrows and use it to stop vehicles so you can capture/destroy them. That’s why I’m not suggesting the compound bow: This one is achieved easily and early, and EMP doesn’t care what the star rating and damage is of the weapon launching it.

Get it via the Guerilla Garrison. If you want a bow for combat, your only real end-game option will be via the Black Market.

Sometimes you’ve got no choice but to blow things up. While grenade launchers can be useful, you’ll typically be targeting things like helicopters or stuff that is farther out – and that’s where the RAT4 comes into play when using guided rockets.

You’ll find it Near the Mercurio Mecanico Guerrilla Hideout.

If you’ve got moneda to burn, don’t forget to check out all the Black Market purchases I recommend. We see them cycle back after a few weeks, and some stick around, so you’ll be replacing many of these eventually if you’re patient.