A detailed guide for how stealth works in Sniper Elite 5 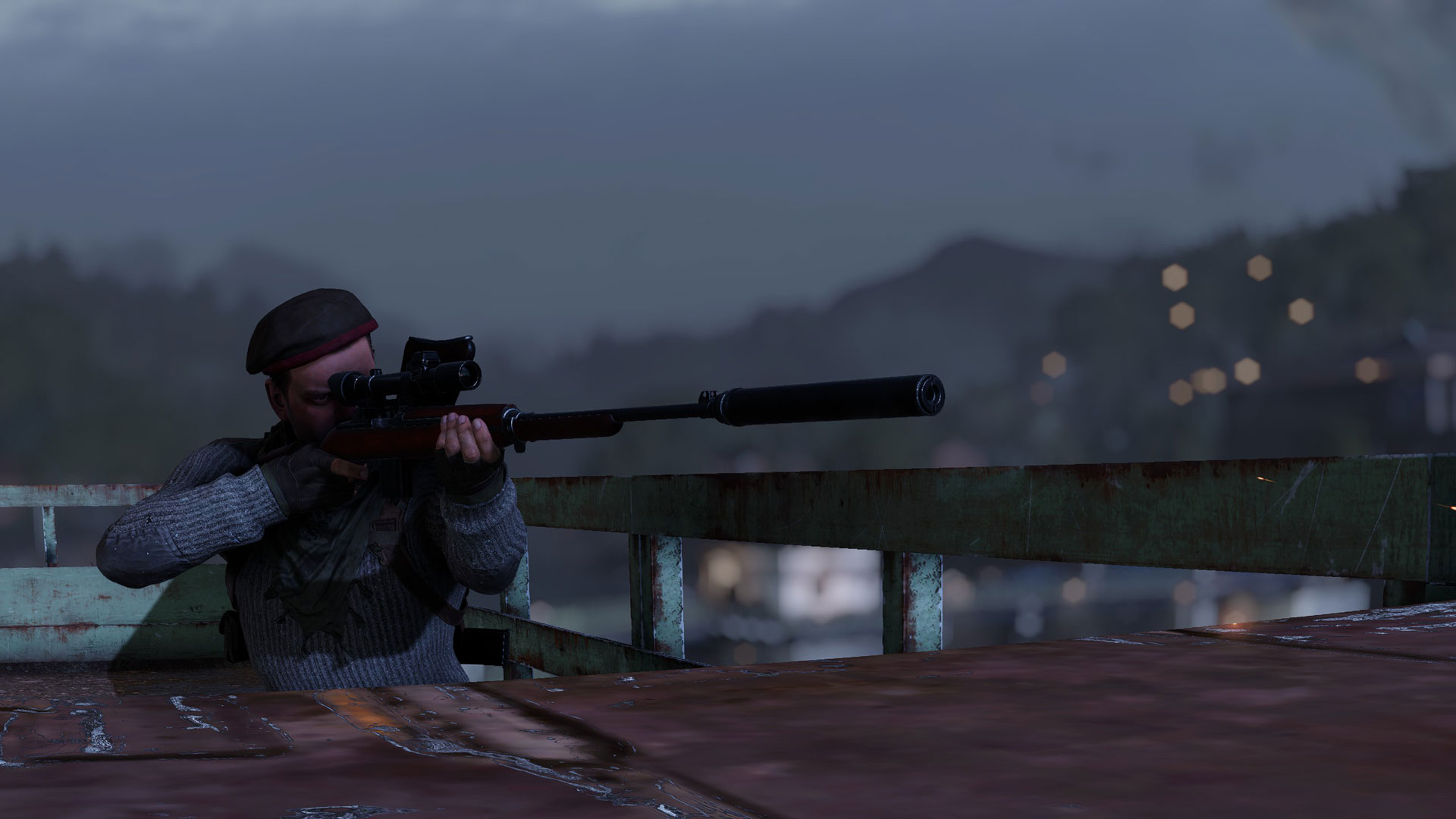 Sniper Elite 5 has a lot of familiar stealth mechanics for fans of the stealth genre, but there are some extra details that anybody could benefit from learning more about. This guide will outline the full stealth system of Sniper Elite 5 so you can better understand and make use of it.

Sniper Elite 5’s mini-map: What does that little circle mean?

The circle within your compass highlights your basic visual detection range as far as standard enemy soldiers are concerned. If they are within the white circle and are looking in your direction, they’ll begin to spot you. The closer you are, the faster they’ll spot you, too.

You’ll notice that the radius of the circle changes depending on your stance. It’ll be at it’s largest when you’re running, and gets progressively smaller when standing still, crouching, and lying prone. Note that movement while crouching or prone don’t impact the visible detection radius.

It should also be noted that some enemies will spot you from outside that detection radius: Snipers and officers with binoculars can see you further away.

The tall grass in Sniper Elite 5

Sniper Elite also has tall grass, like most modern stealth games. Unlike Ghost Recon Breakpoint, though, tall grass is clearly defined as a specific kind of grass, rather than any foliage that covers you based on your stance.

You’ll notice that in the second image, despite being covered by foliage, you don’t get a “hidden” outline indicator on the player model. That’s because only the first type of grass shown will count as tall grass. As well, you must be either crouched or prone within it for it to count.

Tall grass can also serve as a way to hide bodies, FYI.

The final piece of the visual detection system in Sniper Elite 5 is the cover system.

When you enter a “cover” state, your character appears to lean against a wall or other suitable object. This provides you a strict method of retaining stealth and reduces the cone of vision of foes as they walk past you, allowing you to trigger a takedown action.

Cover also works well (in most cases) to allow you to pop out and shoot subjects and return back to cover quickly, reducing the chance of discovery.

Also, as an aside, note that verticality does play an important role. You can hang below a foe or stand on a ledge above them and they won’t notice you.

If enemies have spotted you or hear noise that put them in an alert state, a triangular indicator will appear on your mini map showing your last known position.

If this indicator is in white the enemies believe you were there, but nobody is actively looking for you.

If the indicator is in gold then they feel strongly that you are in that location and are actively hunting for you there.

If the indicator is red you need to take cover elsewhere ASAP – you’re about to take fire!

Scope glint isn’t just how you catch snipers in singleplayer gameplay; When playing multiplayer, if you’re looking through a weapon scope (not iron sights or binoculars), you will create a scope glint in the direction you are facing. This means you’ll be detected extremely easily if you spend a lot of time looking through your scope, so it is best to avoid using your scope until you’re ready to fire!

I have to say, I love how Sniper Elite 5 has added this stat to weapons. Games with stealth systems take note: This is how you do it (I’m looking at you, Ghost Recon series).

This is going to be your most important piece of information when it comes to audible detection range and stealth in Sniper Elite 5.

Planning your loadout for various engagement ranges will be important at higher difficulties. While you can choose an exceptionally quiet primary rifle (such as the M1A Carbine), you may not be able to sustain using it exclusively due to limited ammo and proximity to multiple foes.

Also, be sure to write the detection range numbers down before you start the level: You won’t be able to view it unless you’re at a workbench when in-game!

This is also important in multiplayer: Your enemies will be able to hear your shots and even pinpoint you if they are within the detection radius!

Movement itself actually has only a minor impact on stealth. If you’re crouched you don’t have to worry about creating noise, and can get right behind foes without alerting them.

Running, however, will absolutely cause enemies to get suspicious.

Generally speaking, it’s recommended to move around while crouched when near any enemies.

Sound masks: The tall grass of sound in SE5

There are a variety of ways to mask your sound in Sniper Elite 5, much like hiding in the tall grass. There are typically standard environmental noises on every map that will suppress noise from your firearms, such as airplanes flying overhead, cannons firing and more.

You can also create your own sound mask; Generators and vehicles, for instance, can be damaged to cause excess noise and allow you to fire with impunity at your targets. Keep in mind that triggering one of these to cause a sound mask can actually alert enemies and make them come investigate, so use this mechanic sparingly.

With other general sound masks (such as in the War Factory) level, you’ll notice the sound mask indicator (a sound wave at the top of the screen) varies in size; most of the time it’s a thin vibrating wave, while when there is a loud noise it jumps to a big sound wave.

Other things that impact noise detection in SE5

Explosions – obviously – can alert enemies. While I don’t have an exact range, it would seem you need to be at least 50 meters away from a foe when causing an explosion (but further is better) if you want to avoid alerting them.

Dropping bodies can alert enemies. If they are close enough when you take an enemy out they will turn and discover their comrade, entering an alert state. As well, incapacitating an enemy causes them to make noise that will draw their allies to come to their aid. This can be used to your advantage, too.

Finally, be wary of alarms in the area. If an enemy triggers an alarm this will cause all enemies within an area to enter an alert state AND cause more enemies to come to their aid until the alarm is disabled. Always disable these ASAP if you’re concerned about maintaining stealth.

Enemies in Sniper Elite 5 have 4 states of alertness, and the transition for this is dependent on various triggers, as well as your difficulty settings.

The first alert state is just the standard idle state; Enemies at this state will act normally and detect you at the normal rates.

The second alert state is when an enemy is suspicious or hunting for you. Their marker will take on a golden hue and they may have a question mark above their heads (which indicates them investigating something). They deviate from their normal paths and start searching, hiding or helping their comrades.

The third alert state is outright combat. This means enemies are actively targeting the location you’re suspected to be in and laying down fire while rushing you.

There is one final alert state, but it doesn’t look any different from the first: At higher difficulties enemies won’t actually return to a full “idle” state after receiving the all-clear. Instead, they will return to their regular route, but be more alert in general. This means they will be able to detect you faster should you be spotted. The only way you’ll know if an enemy is in this state is if you mark them: The additional details shown about a marked target will denote their state.

That’s it! As you can see, Sniper Elite 5 has an extremely detailed stealth system, so it pays off to study it.

If I missed anything, let me know in the comments and I’ll get it added!