From prone camo to the tall grass, learn how to maximize stealth in Ghost Recon Breakpoint 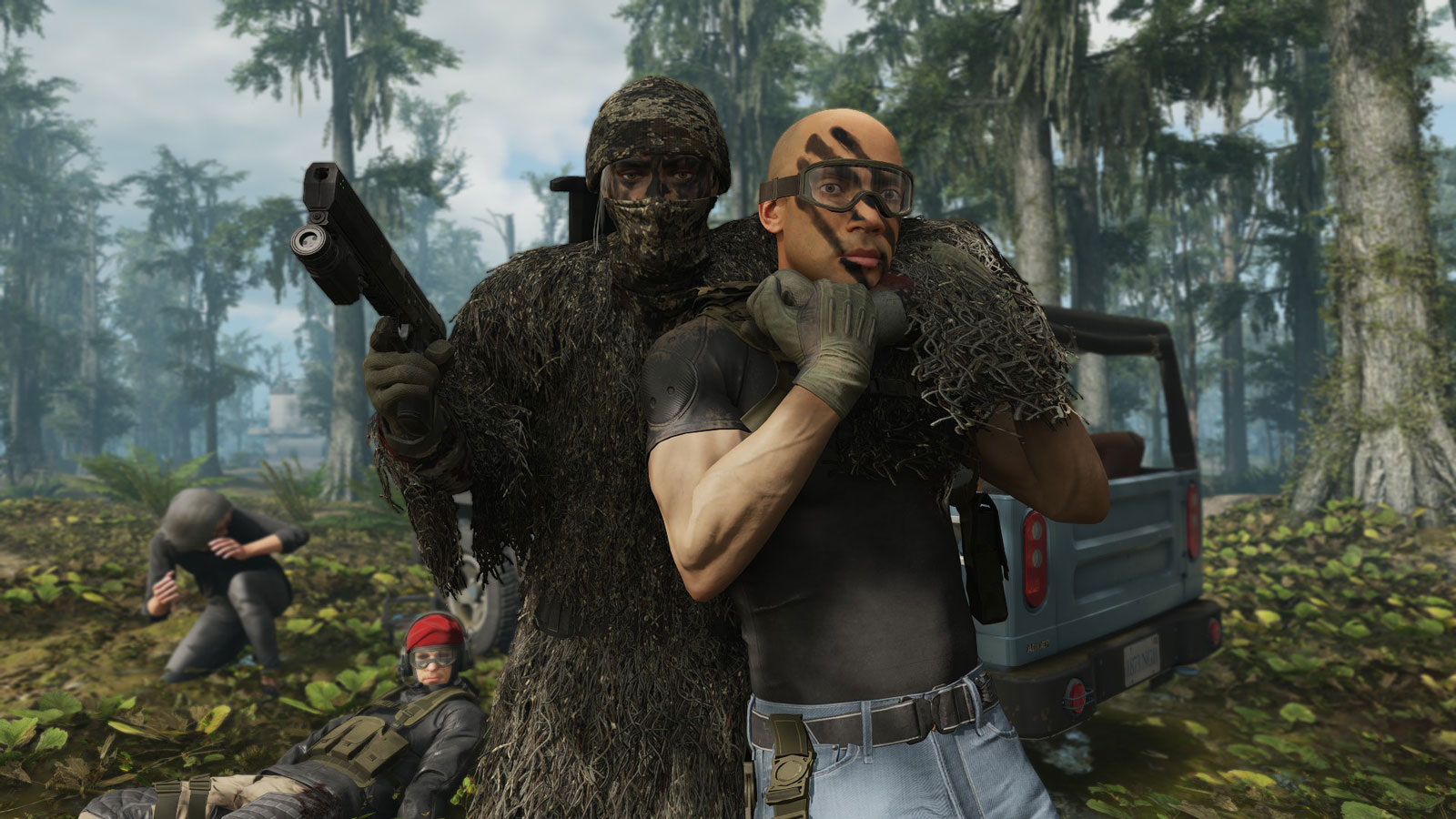 Ghost Recon Breakpoint offers stealth mechanics not unlike the recent Assassin’s Creed games. There are countless ways to hide and stay hidden, and doing so will improve your chances to succeed at stealthily handling missions and subduing enemies. Let’s get started!

There are 5 main factors in Ghost Recon Breakpoint you need to consider for proper stealth. Line of sight, concealment, distance, noise and class/skills.

Line of sight in Breakpoint is obvious; if you’re not directly visible, you’re hidden. The cover system is a little spotty at times, but overall works very well at ensuring you’re not discovered. Keep in mind that poking your head out to aim can reveal you, so make good use of the 3rd person camera to keep an eye out. You’ll have more time than you would out in the open when poking your head out/up to do spotting or shooting, but don’t push it too much. Once alerted, they’ll have a larger area of vision, so keep that in mind, too.

Concealment in Breakpoint has a few aspects to it. Like most modern stealth games, crouching in the tall grass is perfectly viable, although getting too close can still reveal you. Breakpoint doesn’t make this completely clear like it does in games like Horizon Zero Dawn or Ghost of Tsushima as to what consists of tall grass; no colorful markers denoting where you can hide here, but that adds to the immersion. Basically, if you hear the “woosh” and notice a dimming at the edges of your screen, you’re hiding in the tall grass. This also works for bushes, and some forms of foliage cover will only work if you’re prone. Also, Breakpoint has one new unique feature: Prone camouflage. When you’re prone and in a muddy/grassy area, you can hit space on the PC and wipe mud all over your body. This works about the same as hiding in the tall grass, and will be your best friend when avoiding Azrael drones or helicopters.

Distance and how it impacts stealth in Breakpoint is a bit of a disappointment in some ways. Enemies really do have a limited range of vision, so you can usually get pretty close before being spotted if the enemy isn’t on alert as long as you’re crouched. Keep in mind that snipers and drones have a much greater viewing distance over regular grunts, as do Wolves.

Noise levels in Breakpoint are pretty similar to other stealth games in how they impact your ability to stay hidden. Weapons are less easily detected when suppressed, but they aren’t silent. Typically the smaller the weapon, the less noise it’ll make; better to use a pistol than a sniper rifle when in closer ranges. Speaking of, I’ve covered the detection range for numerous sniper rifles and DMRs in both suppressed and unsuppressed variations, so use that information! Running will also get you detected faster than moving slowly (such as being crouched, or crawling), so remember, slow is smooth, and smooth is fast. Also, avoid creating explosions whenever possible if you want to stay hidden.

Finally, your class, skills (and equipment if you have gear score turned on) also play a part of stealth. There are 2 primary classes used for stealthy play, but really you can use any: The Panther gets a bonus to stealth, has a concealing spray that helps them hide vs. drones, and also gets “Cloak and Run”, which allows them to basically drop smoke and hide. The Echelon class offers a bonus to stealth as well, but doesn’t provide any additional tools to stay hidden. Panther is more versatile, while the Echelon class is more unforgiving when stealth breaks (but also provides some nice bonuses if you fancy giving it a go as a poor man’s Splinter Cell in Breakpoint). There are 2 perks that provide a bonus to stealth: Slim Shadow (which provides an overall boost to stealth) and Sensor Hack (which boosts both stealth against drones as well as damage you deal to them). If you want to stay hidden, especially vs. drones, you’ll want both of these.

It should also be noted that if you have gear score enabled, some clothing/armor items will also provide a boost to stealth.

Stealth isn’t always going to work out in Breakpoint; sometimes things just go south. If you’re rocking the Panther class, cloak & run is a fantastic ability that should be used if you’re close to being surrounded and need to get clear. Otherwise, run, and find cover! Get away from where you’ve been spotted. Don’t waste time dropping flashbangs or mines after you’ve been spotted; if you’re far enough away to be able to drop them, then you’re far enough away to get concealed. Better to drop mines near your exfil path BEFORE you have to run.

Don’t run in a straight line, either: Run around cover, hide behind buildings, and try to flank enemies as they come up. Running a zig zag (“serpentine”) pattern and eventually doing a 90 degree turn once you’re out of sight will help you avoid sniper fire and let you observe the enemies as they look for you, so you can pick off stragglers as they come up if necessary.

If you’ve been spotted, you’ve typically got a brief second to take the spotter out before they alert the base. Get that done, but if there are multiple around, you’re better off dropping cloak & run and getting away to fight on better terms.

Important tips to enjoy your stealth playthrough in Breakpoint

Don’t bother hiding bodies in most cases, unless you’re playing online with friends who can spot for you. Picking up and moving bodies takes MUCH too long to do, and typically you’ll have limited places you can hide them.

Make use of sensor grenades, sensor launchers (for sharpshooter class), Azrael drones (for the Pathfinder class) and even just your regular drone to get the lay of the land, especially when clearing one of the larger interior bases (such as the submarine base).

Circle around bases to pick off stragglers first; by clearing them from the outside in, you’re less likely to get flanked or surrounded when you infiltrate a base.

Your AI teammates are hidden as long as you don’t issue any orders and you haven’t been discovered yet. Sync shots will be heard, too, so if you’re inside a base, better to use a sync shot drone than your teammate’s sync shot.

Make use of sync shot drones/AI sync shots liberally to handle patrols and groups; this allows you to take out multiple enemies clustered together without alerting the rest of the base.

Shutting down generators will make enemies investigate them and put them on a partial state of alert; better to disable mortars & turrets individually to maximize stealth.

Camouflage, ghillies and more don’t actually affect stealth. The only time clothing has an impact is when you’ve got gear score on, which enables various boosts to items you pick up throughout the game. Still, looking cool never hurt gameplay any when not in PvP!

Driving a car or truck doesn’t actually conceal you, so be wary when driving. If you can, stick to helicopters, as you can easily avoid those that might detect you.

Behemoths will start firing mortars in your general area once you start firing, even if it’s done indirectly! Even if you’re well-concealed, using the Pathfinder’s drone to attack a behemoth means you can get one, maybe 2 shots out before mortar fire will rain down on your location.

Mortars are your worst enemy; disable them first. They’ll force you out of hiding spots once you’ve alerted the enemies nearby, so if they aren’t already disabled, get them taken out quickly.

The bullet lure is the best tool available for stealth CQB in Breakpoint. Added in November 2020, the bullet lure allows you to draw enemies in a closer proximity away more easily.. And, you can keep luring them further and further back, until you can get them secluded enough to subdue! Bonus: It has infinite uses, and no cool-down!

For faster CQB takedowns, use a straight and/or serrated knife. That’s because it uses a faster animation, while the karambit has a longer, more detailed animation. The more time you spend cutting someone, the more time someone has to spot you!