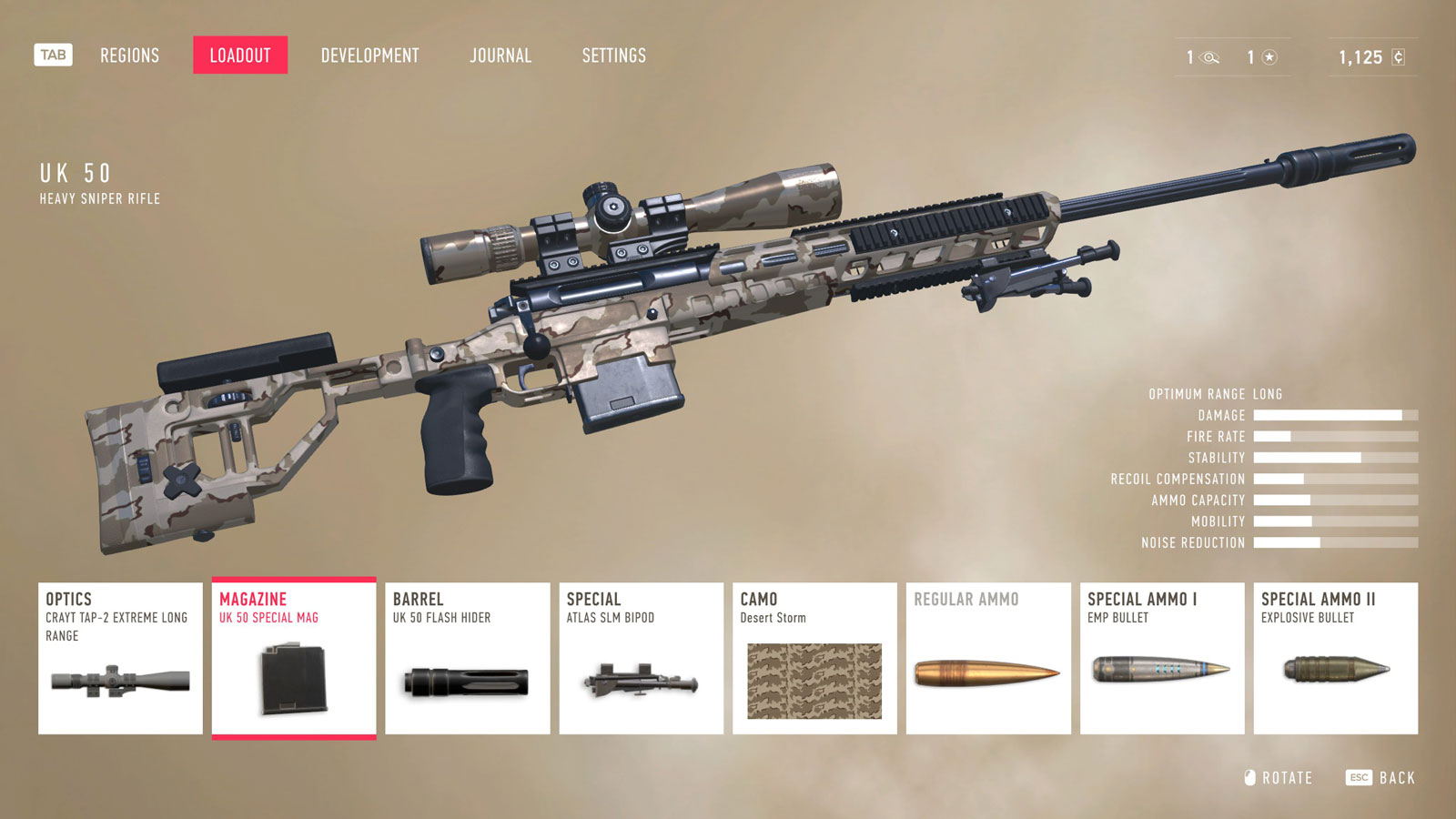 The UK 50 is a workhorse heavy rifle that will literally carry you through every long-range contract in the game: That’s because it’s the first rifle you actually get in the game. Let’s break it down and see why this rifle works so well.

The UK 50 is fairly standard for heavy rifles: High damage, low rate of fire, high stability, low recoil, and everything else is just slightly below average. Noise reduction tends to matter less in the case of heavy rifles: Due to how areas are “zoned”, you’ll never get a heavy rifle quiet enough to not attract people in the immediate vicinity, but that’s all you’ll have to worry about when it comes to noise.

You may be concerned that the damage isn’t maxed like other heavy rifles, but really, any soft target will go down easily just like all other heavy rifles.. So, basically, the stat doesn’t matter, unless you’re firing against a hardened target with standard ammo.

The stability here is nice, especially given this is a long-range rifle with a low rate of fire: You’ll want a high stability to ensure that your round hits the target, and reduce time it takes to actually line up the shot.

Finally, thankfully, the UK50 supports luring, EMP and explosive rounds: EMP and Explosive are particularly useful rounds for any rifle, giving you a great deal of versatility in how you handle long range contracts.

Special: The UK 50 can equip a bipod: This helps with overall stability, so definitely grab it. You’ll want it for long range contracts.

Barrel: You’ve got 2 choices here: A muzzle brake or a flash hider. Generally speaking, on heavy rifles, you’ll want to go with the muzzle break, since it reduces recoil; mobility and noise reduction is less useful for a heavy rifle, which is what the flash hider offers.

Magazine: Like all the rifles I’ve tested thus far, you’re relegated to either higher magazine capacity or an additional magazine for special ammo. Take the special ammo magazine, just so you have some versatility in your engagements.

Optics: Optics wise, like all sniper rifles, you can grab short, medium, long, and extreme long range optics. The extreme long range optic for the UK 50 has a max zoom factor of 40x, which is at the top end (and matched by the HOG 30A2). This means when you’re working on getting the longest shots possible, you’ll be able to comfortably see your targets and line up the shot, OR be able to spot targets easier through partial cover to land that headshot.

General thoughts on the UK 50 in SGW Contracts 2

If you don’t want to buy the DLC weapons, the UK 50 works amazingly well even through the end-game, meaning you don’t have to concern yourself with bounties if you’re struggling in order to purchase rifles like the RON B107. It’s only real downsides are that it doesn’t support AP ammo (which is only useful if you’re trying to take out multiple heavies in a row when it comes to heavy rifles), and has a low rate of fire.

Just stick with the UK 50 until you can get the RON B107, which will be useful in completing any challenges you can’t complete with the UK 50.