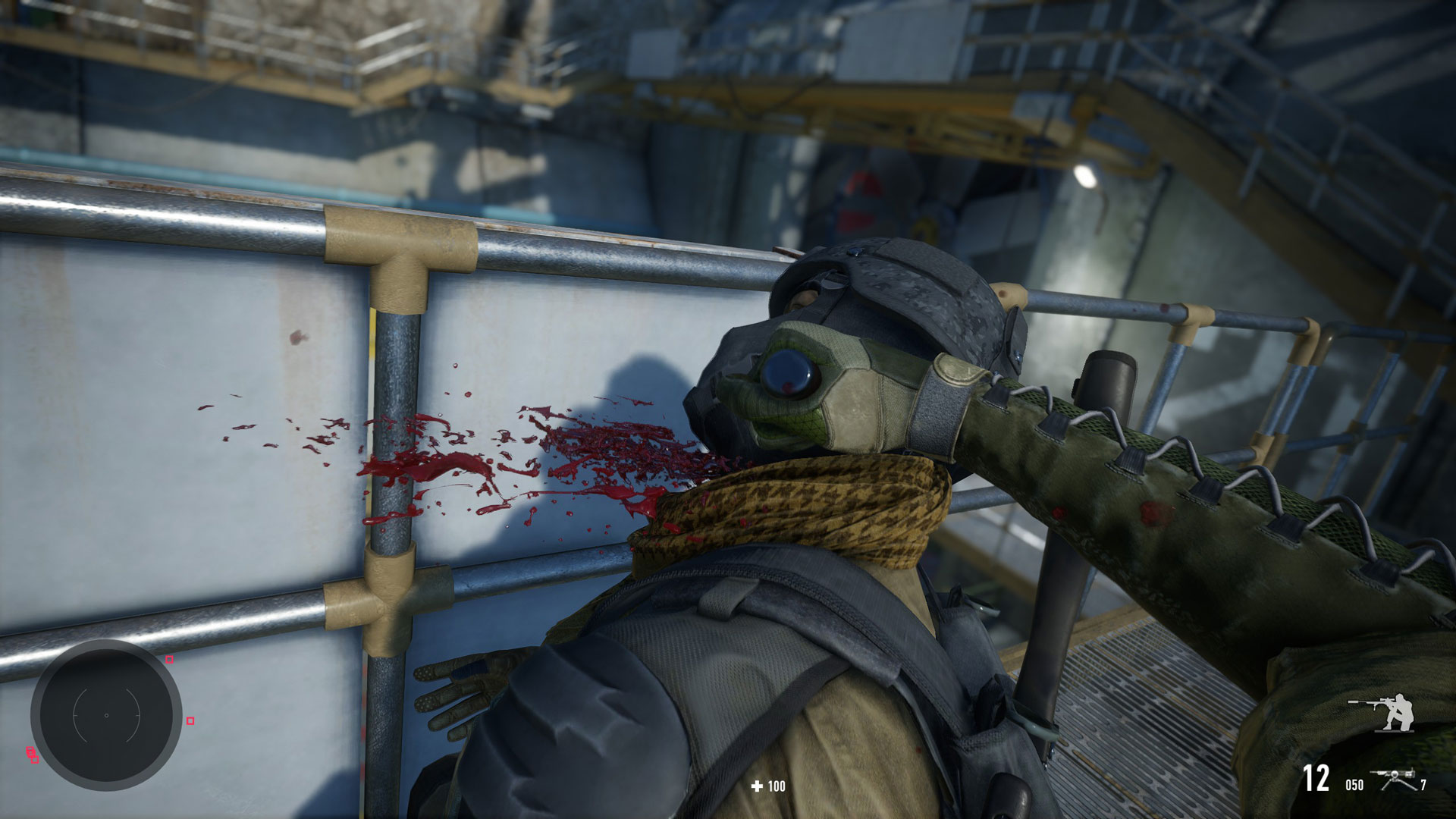 There are 3 methods for staying hidden in SGW Contracts 2.

First, and most obvious, is line of sight. Staying off to the side or behind a guard is a clear choice when attempting to be stealthy, but it’s also important to consider distance. Standard enemies have a fairly limited distance when it comes to spotting you, but you should also be prepared for enemies wielding binoculars, and other snipers: They can spot you from a much greater distance. Of course, when completing long-range contracts, you’ll really only have to worry about that once you’ve alerted the area to your presence, but any time you’re within a few hundred meters of a location, you’ll need to be aware of spotters and snipers and plan your route accordingly.

Second is general visibility. Most foliage can hide you effectively should you stay quiet and not take any overt action. You can even move around a bit without getting noticed, assuming you’re crouched or prone. Take a shot at someone, however, and you’ll be briefly visible regardless of whether you’re hiding in the tall grass, as shown by your silhouette in the lower-right. If you do shoot at someone, make sure you don’t miss! Of course, you can also utilize general objects as cover, such as walls and rocks, but this will only hide you from foes on the opposite side of said cover. It should be noted that standing, crouching, or laying prone also factor in here: The lower you are to the ground, the less likely you are to be spotted, and the longer it will take to spot you.

Third is noise level. Running, jumping and shooting all create noise, although there are perks you can take in SGW Contracts 2 to help here. Shooting, in particular, has a few extra caveats to keep in mind. First: Not all suppressed weapons are created equal. The bow (or crossbow) are going to be extremely stealthy, as are many suppressed pistols, but secondary rifles and sniper rifles will still be heard in many cases. The quietest sniper rifle in the game (the MSSR 10) won’t be heard unless you’re within 7 meters (approximately) of your enemies. In long range contracts this can still be a factor for at least one heavy rifle: The RON B107 without any additional noise suppression can sometimes be heard within 1km!

Like most modern stealth games, there is a “detection meter” that will let you know that someone is slowly starting to become aware of your presence. Once filled up, you’ve let someone know that you’re there, and they’ll start to take action, including alerting the base.

How long it takes to be detected is dependent on a few factors. First is how close you are: The closer you are, the less time it takes for you to be spotted. It should also be noted that spotters and snipers will take less time to spot you at a distance for obvious reasons.

Next is cover and camouflage. If you’re hiding in the tall grass, you’ll usually stay hidden until they are literally right on top of you.. But once they are, you’ve got a fraction of a second to eliminate the foe before they alert the base.

Camouflage, in the context of SGW Contracts 2, is covered by the Universal and Advanced Camouflage perks. Both of these help increase the time it takes to be spotted.

If you’ve noticed someone start to spot you, get to cover immediately and you should be fine. Occasionally, depending on how long you were out in the open, they may decide to come investigate. The spotting meter will dissipate fairly quickly, and then you can get back to creeping around.

It should be noted that noise level does NOT impact detection time directly: Noise only causes them to investigate the source of the disturbance. If a guard is at an alerted state, they can take less time to detect you, but testing this shows that it’s a minimal difference between being right in front of someone not alerted and making a noise and causing them to look in your direction for general guards. Spotters and snipers, on the other hand, will have an easier time spotting you should they be in an alert state.

Of course, if the noise is loud enough to cause an alert state at an entire base, you’d better move to another spot quickly.


What will alert enemies in SGW Contracts 2?

Creating an alerted state on enemies will cause their markers to flash (if you’re playing on anything below Dead Eye difficulty you will see a marker above enemies you’ve spotted) and start searching for whatever alerted them.

Leaving a dead body within visible range of your enemies (note that snipers & spotters don’t typically notice dead bodies any better than standard guards), causing explosions, missing a shot, or making a loud enough noise can cause an “aware” alert state immediately (where the marker will turn red). This means they know a sniper is in the area, and they’ll take action to find you or take cover, as well as alerting the rest of the base.

Some contracts have environmental interactions designed to cause partial alert states: Shoot a radio and a guard may come to see what is going on with it if they are within range of it. Causing barrels to fall, or dropping a crane load can do the same, but if you kill someone with either one and it’s spotted, that will cause an immediate “aware” alert state.

If you cause an “aware” alert state on a single enemy, you’ve got a very brief window to eliminate the target before the rest of the base is alerted. Having a rifle with a high rate of fire will allow you to take quick follow-up shots in these cases, which should help prevent them from alerting an entire base.

SGW Contracts 2 has one unique aspect to detection that is more a development consideration than a gameplay feature: The map is divided into invisible zones, so once you leave a zone, you won’t have to worry about the enemies in said zone. This means you can fire a heavy rifle from 300m away, as long as the enemies are in a separate zone and can’t be seen. This is most likely done to reduce calculations needed to handle enemy rendering and AI pathfinding.

If you leave a zone and come back, you’ll still have to deal with alerted enemies unless enough time has passed that they are no longer looking for you, so don’t think you can exploit this aspect of the game in order to reset the alert state.