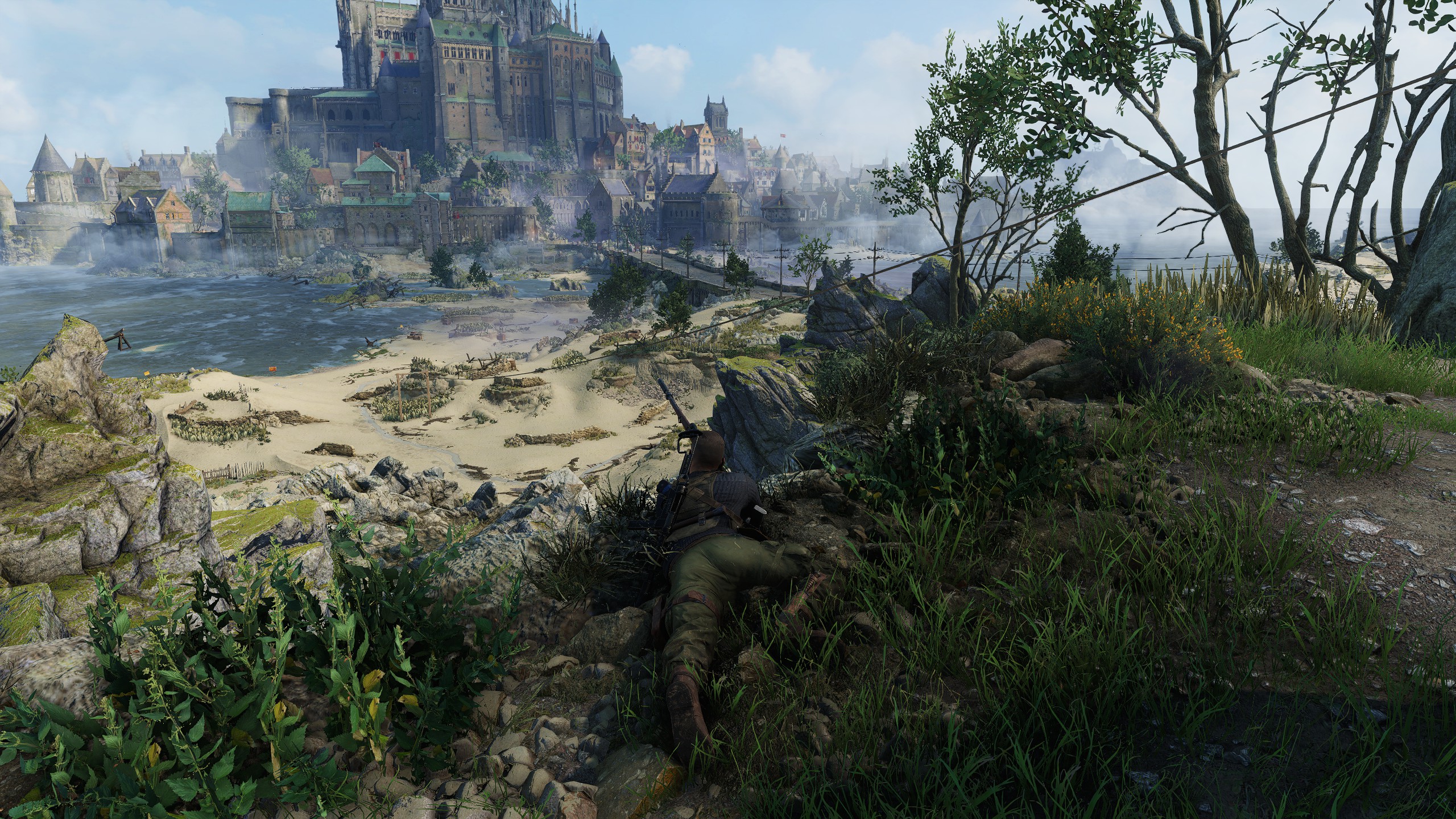 WARNING: While I will try to keep spoilers to a minimum, I do include screenshots of regions up to mission 4 here. While none will be particularly “spoilery”, keep this in mind.

Ah, to have another sniper game with plausible ballistics and solid graphics. The choices are slim, my friends: The most recent game to feature realistic ballistics was Sniper Ghost Warrior Contracts 2. While I enjoyed the game, once you beat it, the replay factor is pretty.. Eh.

Sniper Elite 5, though, finally makes my heart soar.. Not just because it’s got fun sniping (spoiler: It does), but because it also features absolutely spectacular stealth gameplay.

For those of you who are new to Ghost Gamer News, we focus on stealth, sniper and tactical niches here. That means the reviews focus almost entirely on these mechanics as well, so if you’re into that sort of thing, read on!

Let’s get into the review and see why I plan on spending a lot of time playing this game (and why you should too), starting with the sniper mechanics.

I can’t tell you how worried I was about Sniper Elite 5 and it’s sniping mechanics. Sniper Elite 4, while good overall, never really fully captured me. It was interesting, but what I felt was lacking the most was the level design in regards to sniping. Sure, there would be various good perches scattered about in a rather obvious fashion, but in general it felt a little.. Forced?

Sniper Elite 5 has really changed that. Not only have they paid more attention to how sniping works in the game (the familiar bullet drop indicator is there up to Sniper Elite (hard) difficulty), but they’ve also made “Authentic” mode more accessible while still being a challenge (in that you don’t have to estimate windage factors by some quick rule of thumb measurements with your rifle). While some may be disappointed in that, I myself welcome it. I am a fan of modern precision shooting, and would love to finally play a game with proper holdover markers and being able to adjust my turret for windage.

Still, the average gamer isn’t going to be comfortable with that, so we have to make compromises. Sniper Elite 5 has done that, and has done a very good job.

That’s actually another area where it’s similar to SGW Contracts 2, although I prefer Sniper Elite’s implementation (just because I hate the magical reticle in SGW Contracts 2).

Sure, you won’t be shooting 1km+ shots, but with the way the game is designed, you will feel a sense of accomplishment even if the shot is sub-300 meters.

Of course, the classic X-ray kill cam is back, making the job of picking out my screenshots for this review pretty challenging.

Finally, not every job calls for a shot from (relatively) long range: That’s where Sniper Elite 5’s level design really came into its own, which leads us to the next important topic: How is the stealth in Sniper Elite 5?

Yes, Sniper Elite 5 has tall grass. Every stealth game now has tall grass. Hell, I bet if we get another Splinter Cell, it’ll somehow have tall grass inside some sterile corridors of a nameless facility.

Speaking of Splinter Cell.. Wow. The stealth in Sniper Elite 5? “Chefs Kiss”, as the emote goes.

Besides hiding in the tall grass, you’ve got cover mechanics, which work very well here for the most part. Sometimes getting it to trigger “cover” mode can be a challenge, but it’s actually not critical when it doesn’t; you’re still blocked from line of sight.

Of course, prone stealth, variable visual detection radii and more all make an appearance here as they have in previous games. What is interesting, however, is that there are now “non-lethal” takedowns.

Even non-lethal ammunition makes an appearance.

Speaking of ammunition, we should also talk briefly about the elephant-rifle in the room: Noise suppression.

Sniper Elite 4 has the De Lisle Carbine, the one (and only) suppressed rifle in the entire game. Sniper Elite 5, however, makes every sniper rifle suppressible.. And nearly every secondary & pistol. What’s even better is that the noise reduction is actually relatively plausible if you account for general noise pollution in a battlefield!

Of course, when talking about stealth, we also have to once again nod approvingly in the direction of the level designers here.

Getting around the world and avoiding direct, obvious confrontation is a good idea, and the level design and verticality really make this possible..

..And when you roll the dice and fail you get those “Oh Shit” moments, and the adrenaline gets pumping.

Now, the AI has it’s faults here. Sometimes they are like lemmings to the slaughter, which is depressing as the bodies start to pile up. There are a number of ways to game them in some areas, but given the scope of the level design, you’ll never have it perfect. We’ll talk more about flaws later, though. For now, let’s move on to general thoughts on Sniper Elite 5.

This review is getting pretty long, but I have a lot to cover (and more screenshots).. Let’s get to the basics of the game itself.

First off, the game is just beautiful. While not a crazy rendering in UE5, it’s still very good considering it’s not the latest AAA blockbuster. I’m happy. Plus, it runs well (disclaimer: I’m on a high end RTX 3080-loaded PC; older consoles may have issues).

Of course, we can’t talk about graphics without talking about the gore. The kill cam..

This makes for a LOT of interesting visuals. I have well over 300 screenshots, and I’ve narrowed my review down to contain just a smattering of those.

Graphics aren’t everything, though.

Gameplay itself is very well done. The single player progression is great, and has plenty of replay value in collectibles, challenges and more, but that’s not where the TRUE replay value lies.

Invasion mode is just.. Amazing. I seriously love it. I’ve never been a big fan of PvP, let alone game modes that can interrupt another player’s fun, but given that it’s opt-in, I’m OK with it.. In fact, I’ve had some absolutely incredible moments as an invading sniper.

Seriously: I. Hate. PvP. This, however, is going to become my new favorite thing.

The story for the above screenshot was just so epic.. I was hunting around for my target when he sets off an alarm. Turns out he’s doing coop and has a friend. Well, I creep up to the place, and then I see the scope glint.. I immediately bolt and get downed in the tall grass. My target ducks inside the barn while I bandage myself up, popping back up just in time to down HIM! He got up like I did, so I took him down again after a little peek-a-boo game, and then took a precise shot to his single exposed hand through all the clutter he was hiding behind.. Winning.

So fun. In fact, when I start going back to previous missions to get all the optional stuff I plan on enabling invasions so I can finally spend some time getting shot at myself by invaders.

Beyond coop & standard multiplayer there is “Survival”, where you get to defend a position while waves of enemies come at you.

I’m personally not a fan of survival, though your mileage may vary. This one is just a huge disappointment: It basically disregards most stealth & sniping mechanics in my experience, which is just no fun for me.

That leads me to the (thankfully short) negatives portion of the review.

Is there anything BAD about Sniper Elite 5?

While some may say that adding non-lethal mechanics to a game about killing Nazis is bad, I disagree. Instead, I’d like to focus on a few actual complaints I’ve had.

First off, as I noted before, at launch (and as of publishing this review) the game still doesn’t have toggle-to-aim functionality. While there are countless great accessibility options, this is just one of those things that is make-or-break for many gamers like me who suffer from grip issues (although I’ve got a G-Hub macro configured for now).

Next is the insane amount of HUD spam you get.

Just.. Disable as much as you can as soon as you can. Tutorials will spam you without fail CONSTANTLY, and they take up a significant portion of the screen.

There’s also some weird AI quirks. One interesting one (which I neglected to screenshot because I was in the middle of what seemed to be a choreographed dance) involved an enemy running up to me, and both of us repeatedly trying to take out the other with a melee attack at the same time. We’d bounce off each other and try again, and again, and again, until I decided to step back and just shoot him.. Since at that point I’m sure we made enough noise to alert the area anyway.

Invasions, too, can have some quirks. There are already cheaters out there using a variety of awful exploits to ruin the game, which is unfortunate given that the game also includes built-in anti-cheat software (which has a negative impact on slower machines).

However, that’s really the only negatives I’ve encountered personally, so let’s get on to the summary.

Should you buy Sniper Elite 5?

If you like stealth OR sniping, YES. ABSOLUTELY, 100% YES.

Are you new to either genre, but curious about it? That’s OK! There are seriously awesome difficulty controls here that reduce the barrier to entry. You can set overall difficulty to whatever you like, or set specific parts of the difficulty to higher/lower, and THEN drill down into each section’s individual difficulty components if you just want to change one small thing!

How’s that for accessibility?

Seriously, this is the best Sniper Elite game in the series (I’ve been playing since Sniper Elite 2, though, FYI).

I dare say it COULD be the best sniper game out right now, in fact.